The collaborative project is billed as an extended showcase of modern-day Burke County’s thriving art and music scene, local business, outdoor tourism, and charitable organizations. The partnership between Catawba and Burke County Travel & Tourism intends to demonstrate what makes this region such a special place for locals and visitors alike – and why Catawba Brewing has called it home since opening its doors in Glen Alpine in 1999. In recent years, the family-owned brewery and the county have both seen rapid growth and significant investments, seemingly in parallel.

Representatives from both organizations will be on hand to talk about the initiative, which will include a traveling roadshow slated for an appearance at Catawba’s new Wilmington location on Tuesday, April 27th. The partnership is the first of its kind between a North Carolina brewery and a local tourism development authority.

At the Morganton event, Catawba representatives will offer tours of their production brewhouse and newly renovated tasting room. Cousins Maine Lobster food truck will be on-site for visitors who wish to stay for dinner. Please note that pandemic protocols are still in effect and masks are required inside the brewery in accordance with CDC and North Carolina guidelines.

The project will serve to highlight Catawba’s legacy as pioneers in the North Carolina craft beer industry. A historical exhibit prepared by the NC Craft Beverage Museum will be on display at the Morganton tasting room, looking back fondly at Catawba’s 22 years in craft beer. In the spirit of the event, the brewery will offer exclusive throwback merch items from decades past.

Burke County’s favorite local beer since 2002, Farmer Ted’s Golden Ale, will be highlighted at the event with a commemorative 4-pack. The 16oz collectible cans display label art from all four generations of the beer’s existence. An exclusive Small Batch variant of Farmer Ted’s will make its debut on Thursday – elevating the brewery’s flagship Golden Ale with an infusion of fresh blueberries and raspberries.

Catawba is a proud supporter of their local communities, donating an estimated $50k to Burke County non-profits alone, with an additional $400k going to local artists and musicians who have performed at their tasting room over the years.

The Pyatt family business has invested over five million dollars in Burke County property, equipment, and infrastructure to the benefit of the community and the brewery’s 40 local employees. Company-wide, Catawba employs a total of 120 across four North Carolina cities (Morganton, Asheville, Charlotte, Wilmington) and Charleston, SC.

Catawba Brewing Co. has been an industry leader in Western North Carolina’s craft beer scene for two decades. The company was founded in 1999 by WNC natives, the Pyatt family, who were inspired by their weekend homebrew hobby. From humble beginnings, the business has grown exponentially to become a major craft beer supplier across five states. Catawba now operates breweries and tasting rooms in four NC cities – Morganton, Asheville, Charlotte, and Wilmington – embracing a hybrid wholesale/retail strategy. With the 2018 acquisition of Palmetto Brewing Co. in Charleston, SC, the Pyatt family hobby has spawned one of the Southeast’s largest and most diverse craft brewing entities. Learn more at www.catawbabrewing.com 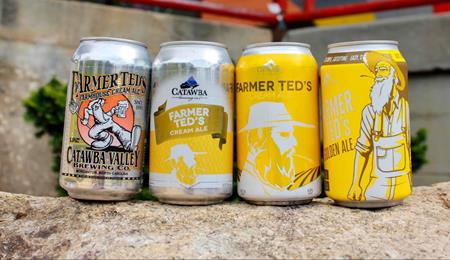