Be prepared to taste the amazing, the incredible, all Massachusetts line up of beers

In town for one day only, on Saturday, Sept. 21 from 1 to 5 p.m. on the Worcester Common - come and be the first to try special collaboration beers brewed by teams of breweries across the Commonwealth. This event will feature food trucks, yards games and more than 50 local breweries. Tickets are $45 for general admission and $10 for designated drivers. General admission includes unlimited beer samples from participating breweries.

The Great Mass Collab is hosted by the Mass Brewers Guild, the state’s trade association that works to protect and promote the interests of Massachusetts craft brewers. Mass Brewers Guild festivals are the only beer events run by brewers for brewers, with all proceeds benefitting the craft beer community to provide resources, training and government affairs support to these small, family-run businesses.

Come and marvel at everything our Massachusetts brewers have created, only at The Great Mass Collab. Looking for the beer list, FAQs, festival map, or where to park? Download our free mobile app available in iTunes and Google Play stores, Mass Craft Beer. For more information about the Mass Brewers Guild, visit massbrewersguild.org.

The Mass Brewers Guild has partnered with Lyft to provide responsible transportation to The Great Mass Collab on September 21. To redeem, enter MASSCOLLAB19 into the 'Promo's' section of the Lyft app. Subject to Lyft terms. Maximum discount $10. 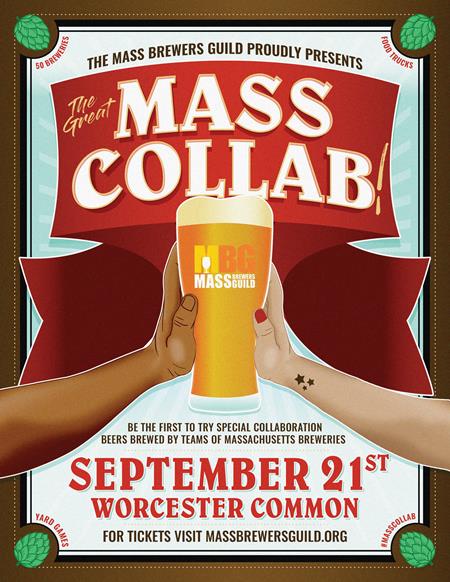