A portion of CMBC's sales from 4-8pm will be donated to Chapter II of the Police Unity Tour.

Each and every day, the men and women in blue serve and protect us, putting their lives on the line to make our neighborhoods safer and our streets free from crime. It’s a difficult job, a thankless job, and not everyone who does it makes it to the end.

That’s why, for Police Appreciation Month, Cape May Brewing Company once again wants to extend our gratitude to those who have given us so much with a Pint Night in honor of Chapter II of the Police Unity Tour.

For this very special Pint Night, a portion of our sales from 4-8pm will be donated to Chapter II of the Police Unity Tour. Last year’s Pint Night raised over $300, and we’re hoping to break that number this year.

Founded in May of 1997, the Police Unity Tour seeks to bring public awareness of police officers who have died in the line of duty and to honor their sacrifices. Beginning with 18 officers on a four-day fundraising bicycle ride from Florham Park, NJ, to the National Law Enforcement Officers Memorial in Washington, DC, the organization has since grown into nine chapters consisting of nearly 2,500 members nationwide who make the trip annually, raising $2.6M last year for the National Law Enforcement Officers Memorial Fund.

So come down to the brewery and help us thank those who do so much for us every day. 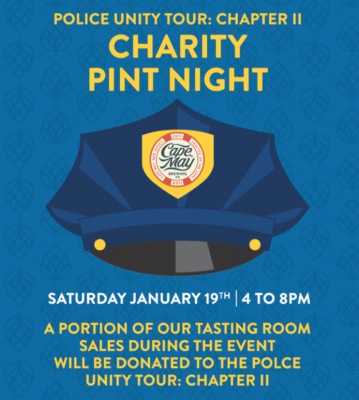