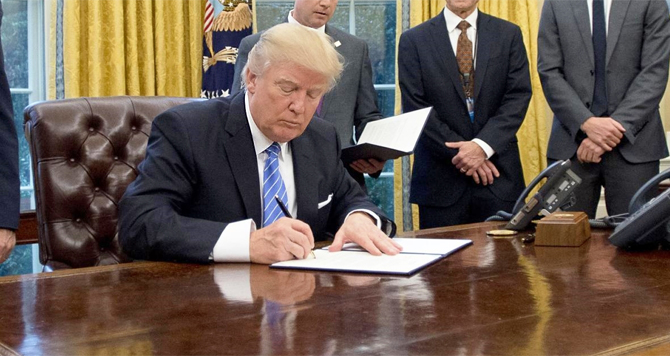 Nearly two weeks after lifting aluminum and steel tariffs imposed against Mexico and Canada, President Donald Trump has reversed course and announced plans to levy a 5 percent duty on all goods from Mexico over immigration — bringing the issue back into the taproom.

In a tweet Thursday night, Trump said the U.S. would implement the new tariffs on goods from Mexico starting June 10. The duties would then remain in effect until Mexico — the second-largest importer of goods to the U.S. — stops the flow of “illegal migrants coming through Mexico” into the U.S., he added.

“The tariff will gradually increase until the illegal immigration problem is remedied, at which time the tariffs will be removed,” he wrote.

The new threat of tariffs levied against Mexico has now put into jeopardy the proposed United States-Mexico-Canada Agreement. On May 20, Trump lifted tariffs of 25 percent on foreign steel and 10 percent on imported aluminum on goods from Mexico and Canada after about a year.

According to the White House, the new tariffs on products from Mexico would increase 5 percent a month until hitting a 25 percent duty in October.

“Tariffs will permanently remain at the 25 percent level unless and until Mexico substantially stops the illegal inflow of aliens coming through its territory,” the White House said.

In a press release, Beer Institute (BI) president and CEO Jim McGreevy urged the president to rethink imposing the tariffs.

“Imposing a tax – and tariffs are taxes – on the largest import country of the beer industry would harm the 2.1 million Americans who owe their livelihoods to beer,” he said in a press release “Whether it be the truck driver, farmer, distributor, local retailer or favorite tavern, every community in America will be affected by this decision.

“The last thing we need is more hardship imposed on the beer industry and American beer drinkers,” he added.

According to the BI, the tariffs would cost beer importers $12.5 million in the month of June, and as much as $374 million by the end of 2019. A 25 percent annual tariff, the BI added, would cost the beer industry $984 million per year.

The U.S. is projected to import more than 360 million cases of Mexican beer by the end of 2019. Beer accounted for more than 1 percent of Mexican imports to the U.S. in 2018

A month after Craft Brew Alliance agreed to settle a years-long class action lawsuit over alleged “false and deceptive advertising” of its Kona Brewing beer brand, the Portland, Oregon-based craft beer company has detailed the settlement agreement in a May 23 SEC filing.

As part of the agreement, CBA will pay up to $10 to customers without receipts and as much as $20 to those with a proof of purchase. CBA has said it expects to incur costs of $4.7 million to settle the dispute.

According to the original complaint, CBA “intentionally” misled consumers ito believing Kona products are made in Hawaii. Although CBA operates a production facility in Hawaii and produces thousands of barrels on the island, a majority of Kona beer sold in the continental U.S. is brewed at facilities in Portland, Oregon; Portsmouth, New Hampshire; and at an Anheuser-Busch brewery in Fort Collins, Colorado.

In a press release, Ruedrich, who founded North Coast in 1988 with Tom Allen and Joe Rosenthal, called leading the Fort Bragg, California-based craft brewery “one of the greatest joys” of his life. He will continue to serve as a consultant and hold a seat on North Coast’s board of directors.

“I’m honored and humbled to be named North Coast Brewing’s CEO and carry on Mark’s incredible legacy,” said Kraynek, who joined the company in 2013. “The spirit and heart of North Coast Brewing will continue in our daily work, our creative approach to craft beer and our best practices in sustainability, which have been a part of our DNA since the beginning.”

NFL Allows Players to be Featured in Beer Ads

However, the NFL has put restrictions on its players’ participation, including:

The NFL also eased restrictions on wine and spirits companies, allowing them to become “official” sponsors of its franchises. Although wine and hard liquor companies will be allowed to use team logos on packaging, they will not be able to use players in their advertisements.

The Chicago Tribune chronicled attempts by No-Li Brewhouse founder John Bryant to resolve a dispute with Anheuser-Busch-owned Goose Island, which recently began using the name “Born + Raised” for a new, draft-only ale that is exclusively available in Chicago.

Spokane, Washington-based No-Li has used the “Born & Raised” name for its flagship IPA for the last seven years. He claims No-Li has “first-use” rights to the name. However, his efforts to resolve the issue have been rebuffed by Goose Island leaders.

“I don’t think we should have to give Anheuser-Busch a brand that’s established since 2012,” he told the Tribune.

For his part, Goose Island president Toss Ahsmann said he’s confident the Chicago craft brewery can use the name since No-Li doesn’t own a federal trademark on the name.

Anheuser-Busch InBev is deepening its influencer relationship with rapper Post Malone. “Special edition” cans of the light lager will feature the popular rapper’s face, according to MyBeerBuzz.

The Bud Light brand’s relationship with Post Malone dates back to 2017. Last year, Post Malone was featured in advertisements, as well as the its “Dive Bar Tour.”

Deschutes Brewery is attempting to position itself as “the beer of choice in the land of recreational cannabis,” the company said in a press release. The Bend, Oregon-headquartered craft brewery released a series of videos and advertisements earlier this week as part of its new “It Comes with the Territory” campaign.

According to Deschutes vice president of marketing Neal Stewart, the company is “drawing attention to the healthy tension between craft beer and cannabis.”

“People are going to enjoy recreational cannabis, but we want to remind them that this is still one of, if not the best place on Earth to enjoy a beer and Deschutes helped put the craft brewing industry on the map,” he said.