Join us for Ziegenhügel, our first Traditional Kolsch Service! We're serving up our Goat Hill Kolsch and Wood Oven Eats is bringing out the German fare for this special event.

Kölsch is traditionally served in a tall, thin, cylindrical 20-cL glass called a Stange ("spike" or "rod"). The server, called a Köbes, carries twelve Stangen in a Kranz, a circular tray resembling a crown or wreath. Instead of waiting for the drinker to order a refill, the Köbes immediately replaces an empty Stange with a full one, marking a tick on the coaster under the Stange. If the drinker does not want another refill, he or she places the coaster on top of the empty Stange and pays for the number of beers marked on the coaster. 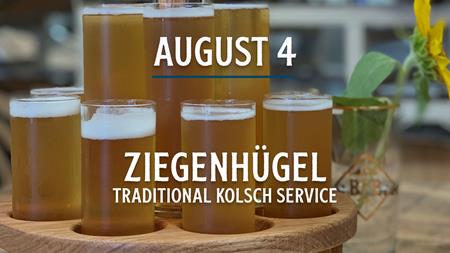