Catawba returns their classic King Don's Pumpkin Ale and unveils a new challenger to the throne.

Catawba Brewing Co. will release its duo of pumpkin beers – King Don’s Pumpkin Ale and Emperor Don’s Imperial Pumpkin Ale – on Sept. 6. Both beers will be available at all Catawba tasting rooms, draft and cans.

Same name. Bigger throne. King Don’s pays homage to the originator of the pumpkin beer in North Carolina, but Emperor Don’s Imperial Pumpkin Ale carries the crown to the next level. Bigger, bolder, and more regal than our original pumpkin ale, this new variant is everything you love about the King and more. After all, it’s good to be King, but it’s better to be Emperor. 16oz. 4-pack cans. 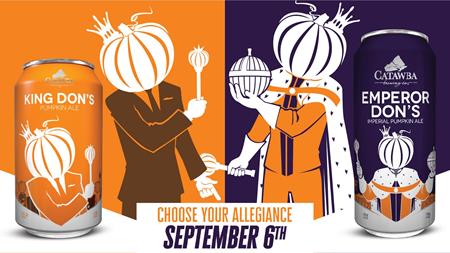