Catawba Brewing announces the release of their new flagship IPA, the HOPness Monster. The beer was named for a mysterious beast that lurks in the cold fresh waters of Western North Carolina, terrorizing poor, hop-shy souls. As the locals say, “Bless their hearts.” Brewed with an abundance of fresh Citra and Cascade, this IPA boasts a big biting hop profile layered with ripe tropical fruit, juicy citrus, and pine. At 6.5% ABV and 60 IBUs, it strikes the perfect balance of everyday drinkability with intensely aromatic and flavorful hop character.

HOPness Monster once again affirms Catawba’s 18-year brewing legacy with the next great India Pale Ale. While Firewater (2001) helped lead the march toward hop-forward beers in the early years of the WNC craft beer scene, HOPness Monster reflects a giant leap in the evolution of American IPAs. The new recipe was crafted through small batches from Catawba’s pilot brewery in Asheville, and market tested across Beer City USA. This is a beer for the new breed of hophead.

HOPness Monster will debut in Catawba tasting rooms on Saturday, May 20. Look for it to arrive in 5-state distribution immediately afterwards, both on draft and in 6-pack 12oz cans. The beer will also be featured at the 2017 Beer City Festival on Saturday, May 27. Catawba will have further announcements in the weeks ahead about special events around the release. 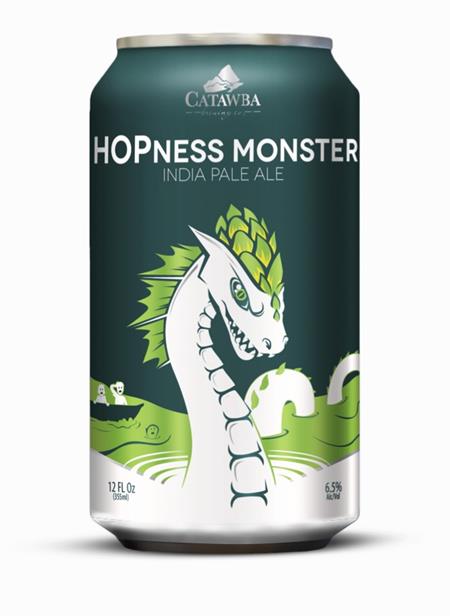