Fun times, bikes and beers. Bring a smile & your best costume, we're about to have a good time!

Tour de Fat, a daylong festival in the park that celebrates the bicycle, showcases New Belgium beers and provides eclectic and engaging entertainment for all. It’s a free event, but all proceeds from beer sales go to local nonprofits. In Durham, N.C., the benefiting nonprofits are BikeWalk NC, Triangle Spokes Group and Durham Bike Co-Op. Tour de Fat raised more than $600,000 for nonprofit organizations in 2014 alone.

The events kick off in Diamond View Park and the eclectic entertainment takes over, with national musical acts to yo-yo performers, touring comedy groups, artistic ensembles, bike contests and even vaudeville acts. You won’t want to miss the 1,000 Person Dance Contest either – there’s a wide variety of games and activities for everyone to enjoy! 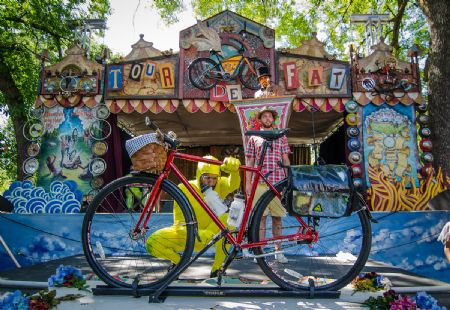