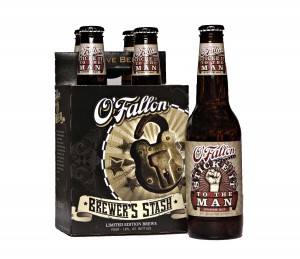 The first beer in the series, Sticke It To The Man, is a Sticke (pronounced: schtick-uh) Alt beer which is a darker, hoppier version of the traditional Dusseldorf Alt style. Sticke Alts were originally brewed in Dusseldorf, Germany. The word “sticke” is local vernacular for “secret,” so traditionally breweries do not reveal the recipe.

Sticke It To The Man features five types of malt, along with classic German hops, resulting in a beautifully complex ale. Subtle fruit esters, toasted malt and a spicy hop flavor and aroma combine to make Sticke It To The Man a perfectly balanced beer.

The origin of the Sticke Alt style dates from a time when beer ingredients were still measured by the bucketful. If a brewmaster made a mistake and mashed in too much malt, he also had to add an extra dose of hops for balance. The finished beer would be particularly strong and complex.

“Our new ‘Brewer’s Stash’ series and Sticke It To The Man in particular, are really targeted at beer drinkers who are looking to discover big, bold, special beers,” said Brian Owens, O’Fallon Brewery’s brewmaster. “Technically it’s a Sticke Alt which is pretty unusual style. The beer has a medium to full body, notes of caramel and toasted, nutty malt complemented with floral German Noble hops. “

Sticke It To The Man has a deep, copper hue and is relatively clear, but unfiltered, so as not to disturb the Noble hop aroma.”

Sticke It To The Man is 7.5 percent alcohol by volume, 40 IBUs and will be priced similarly to other specialty craft beers. The beer will be available May through August when it will be replaced with the next beer in the “Brewer’s Stash” series.

“We are always challenging our brewmasters to develop beers that are a bit unusual, beers that can really give O’Fallon drinkers amazing experiences,” said Jim Gorczyca, O’Fallon’s owner and president. ”Years ago we brewed one of the first pumpkin beers in the country, and we’ve followed up with beers like Wheach, Hemp Hop Rye, Cocoa Cream Stout and Belgian Dark Strong. Our ‘Brewer’s Stash’ series is going to take things to the next level with beers you won’t find anywhere else.”

O’Fallon Brewery is also introducing its award-winning 5-Day IPA and Wheach (peach-flavored wheat beer) in six-pack 12-oz. cans. The new can packages will be available at retail beginning in May.

About The O’Fallon Brewery