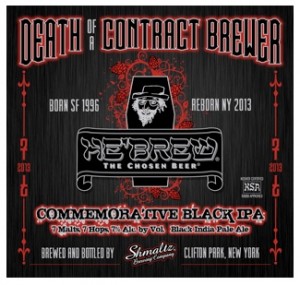 Clifton Park, NY — A commemorative beer to mark Shmaltz Brewing’s transformation from 17 years as a contract brewer to their new life at their very own Upstate New York brewery, DEATH OF A CONTRACT BREWER┬« becomes a year-round offering within Shmaltz’s award-winning portfolio. Death of a Contract Brewer┬« is brewed with 7 Malts (specialty 2-row, munich, wheat, crystal rye, chocolate, pale chocolate, kiln coffee) and 7 Hops (cascade, citra, summit, crystal, amarillo, ahtanum, chinook), and comes in at 7% Alc. Death of a Contract Brewer┬« is now nationally available across 37 states in 22 oz. bottles and a limited amount of draft at select bars.

“Celebrate our rebirth with Shmaltz’s first-ever black IPA, brewed with 7 malts, 7 hops and 7% abv,” says Shmaltz Brewmaster Paul McErlean. “Savor this rich, jet black IPA — overflowing with characteristics of coffee, dark chocolate, and fresh citrus with a mix of pine. Deep roasted malt flavors provide support for a bold mix of bright and bitter West Coast hops. We promise, this is one form of Death you’ll want to pour in a glass and shout L’Chaim! (to life!).”

Shmaltz will offer a chance to win one of eight magnums of Death of a Contract Brewer┬« (3L, $100 value) to anyone who purchases an event ticket in advance of the 1st Anniversary Party on May 17. Two winners will be announced every Friday at 3pm leading up to the event and two final winners will be announced onsite at the Shmaltz Party. For additional event information and to purchase tickets, please visit shmaltzbrewing.eventbrite.com.

Standout Praise for Death of a Contract Brewer┬«:

“Death of a Contract Brewer┬« is no gimmick. While the style of a black IPA isn’t new, Shmaltz takes it to new heights…This is a serious beer for fanatics of the style.” –The Ledger (Central Florida)

Ranked in 2013 as one of the “Top 100 Brewers in the World” by RateBeer.com, Shmaltz won 9 Gold and 5 Silver Medals in the World Beer Championships (2012) and a 2014 World Beer Cup Silver Medal in the Wood and Barrel Aged Sour Beer Category for Funky Jewbelation┬«. A recipient of the “Distinguished Business Award” by the Brooklyn Chamber of Commerce, Shmaltz was also included in the “Top 50 Fastest Growing Bay Area Companies” by San Francisco Business Times.

Founder and still sole proprietor Jeremy Cowan established the company in San Francisco in 1996 with the first 100 hand packaged cases of He’brew Beer┬« which he delivered with his grandmother’s Volvo. He’brew┬« now sells across 37 states, through 40 wholesalers and nearly 5,000 retailers. In 2007, Shmaltz released a new line of craft brewed lagers under the Coney Island┬« banner. The Coney Island brand was recently acquired by Alchemy and Science, a craft beer incubator, owned by Boston Beer (Sam Adams).

From the label of Death of a Contract Brewer┬«:

Death seems so obvious: the end of life, no mas, kaput. But Humans stand an optimistic animal. Many traditions suggest alternate endings: Resurrection, reincarnation, rebirth, afterlife. Even the atheist view of Eternal Oblivion doesn’t seem quite final, more of a shift in spiritual states of (un)consciousness. As usual, Jewish tradition prescribes… Food. 7 days of family, community, and bagels (beer!), called, Shiva, meaning “7” in Hebrew. The flip side to the 7 days of Creation with the 7th as a holy day of rest. The first meal of Shiva is “the comfort meal.” And the number 7 provides powerful mojo: 7 Jewish wedding blessings, 7 Liberal Arts, 7 Lucky Japanese gods, 7 stars of the Big Dipper, 7 colors of the rainbow, 7 seas, 007 license to kill, 7 dwarves, We are 7 by Wordsworth with a child’s view of death, 7 deadly sins, Best of 7 finals in NBA, NHL, MLB, 7th Inning stretch, no. 7 on Elway & Tiny Archibald. George Costanza yearned to name his firstborn, “7” as a living tribute to no. 7 Mickey Mantle. The 7 Award however must go to the immortal George Carlin for 7 Dirty Words, inspired by another hero Lenny Bruce. Coming into 17 years of beer, and Year no. 1 with our own Brewery, we commemorate this conversion with Death Of A Contract Brewer, our Shmaltz homage to new life – L’Chaim!