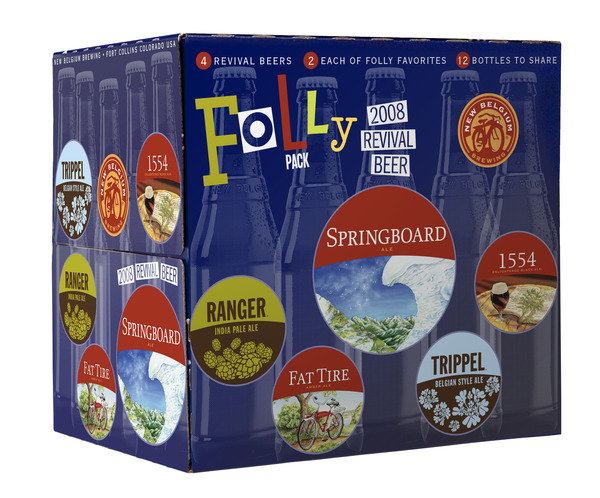 FT. COLLINS, Colo. — New Belgium Brewing, maker of Fat Tire Amber Ale and a wide variety of award-winning beers, is bringing back fan favorites from the proverbial “past”. Starting in 2013, each Folly Pack (mixed 12-pack of New Belgium beers) will have a beloved former seasonal release from the archive.

“We’ve been rotating out seasonal releases every two years to keep things fresh for the beer drinker,” said New Belgium Spokes Model, Bryan Simpson. “We get a lot of requests for classics like Loft, Springboard and Giddy Up, so this allows us to revisit some old faves while keeping the seasonal program progressive and dynamic.”

The following beers will be packed for folly:

The *asterisks represent the “throwback” beers that aren’t available outside of the Folly Pack.

In other news, New Belgium’s spring seasonal Dig Pale Ale will soon hit the shelves. Dig will be the focus of New Belgium’s upcoming BeerStream, a live video feed hosted by New Belgium that gives fans an opportunity to engage with brewers and assorted brewery folks in a virtual tasting and Q&A. The next BeerStream event is February 12 at 6:00 p.m. mountain time.

New Belgium Brewing, makers of Fat Tire Amber Ale and a host of Belgian-inspired beers, is recognized as one of Outside Magazine’s Best Places to Work and one of the Wall Street Journal’s Best Small Businesses. The 100% employee-owned brewery is a Platinum-level Bicycle Friendly Business as designated by the League of American Bicyclists, and one of World Blu’s most democratic U.S. businesses. In addition to Fat Tire, New Belgium brews eight year-round beers; Ranger IPA, Shift Pale Lager, Sunshine Wheat, 1554 Black Ale, Blue Paddle Pilsener, Belgo IPA, Abbey Belgian Ale and Trippel.