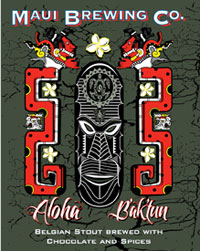 LAHAINA, MAUI, HI – Maui Brewing Co. (MBC) is very proud to announce the release of Aloha B’ak’tun, the last of four limited release beers for 2012. Aloha B’ak’tun, which loosely translates to “hello and goodbye to a calendar period of 400 years”, was brewed last Friday, December 21st to coincide with the last day of the Mayan calendar, which many believed was to be the end of the world. Of course, nothing came to an end that day, but MBC did say goodbye to some of their ‘ohana and welcomed new members to the team – Aloha B’ak’tun is a tribute to them all.

Aloha B’ak’tun is a Belgian style Stout brewed with Big Island chocolate, locally-grown chipotle peppers and cinnamon. This delicious stout is currently available on draft at the Maui Brewing Co. brewpub and is being canned for distribution to retailers by mid-January. The ABV on this beer is 7%.

In total, approximately 400 barrels will be produced out of which 4300 cases will be canned and the difference to be available in draft.

“All market areas where MBC is distributed will receive product but specific allocations will be based on sales,” explains Garrett Marrero. “Aloha is often thought of to mean hello and goodbye; we felt the name was fitting given the ‘uncertainty’. The draft release on December 21st was a big hit and we’re excited to launch cans shortly. I’m sure they’ll go quite fast as our limited release series has really developed a following. Cheers to all!”