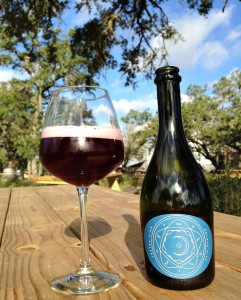 When we referment our sour, barrel-aged beer with fruit, our goal is to create something that’s greater than the sum of its parts. We allow the fruit to become fundamentally transformed by native yeast and bacteria in our beer, resulting in new and interesting flavors. We’re particularly pleased with the way we have been able to achieve this with Colour Five, and we’re excited to release this beer, which has taken a very long time to create.

A previous attempt at refermenting sour, barrel-aged beer with blueberries was far less successful. Back in 2013, we added blueberries from east Texas to oak barrels containing sour red ale, and allowed the sugar in the fruit to referment. Unfortunately, the results did not meet our standards, and the beer was sent down the drain. The batch had become acetic or vinegary, a characteristic that we detest in sour beers, but unfortunately encounter far too frequently throughout the beer world.

On the whole, we’re quite willing to sit back and allow fermentation with native yeasts and bacteria to take our beer in all sorts of interesting directions. But one part of our process that we do control very carefully is temperature. We keep our barrel room right around sixty degrees Fahrenheit year-round in order to keep acetobacter (the bacteria that produces acetic acid) at bay. At extremely low levels, acetobacter can add some pleasant complexity and depth of flavor, but if allowed to grow, it can easily take over. Unfortunately, our first attempt at blueberry refermentation became overly acetic and was dumped. Jester King is a very experimental brewery, and part of what this means is that some of our experiments fail. Never dumping any of our beer would mean that we were selling you our failed experiments. This is not something we will do.

There were several things we decided to do differently this time, as compared with our failed blueberry refermentation in 2013. First, we used a different base beer. The blueberries were refermented with a blend of 89% Das ├£berkind — our “old” saison aged for months in oak barrels with native yeasts and bacteria, and 11% RU55, our barrel-aged sour red ale. The base for the 2013 batch was 100% RU55. Second, the base beer and the blueberries were blended and allowed to referment in a stainless steel tank, which allowed us to keep a constant blanket of carbon dioxide over the beer, in order to stave off oxygen, which can lead to the growth of acetobacter. Finally, we froze the blueberries for this batch prior to refermentation, in order to decrease the population of acetobacter on the skins of the fruit. There were also some elements that we did not change, including the sourcing of blueberries from east Texas, and the use of carbonic maceration to burst open the skins of the berries, rather than crushing them.

Colour Five was brewed with Hill Country well water, barley, wheat, and hops. It was fermented with our unique mixed culture of microorganisms, which includes farmhouse yeasts, naturally occurring wild yeasts harvested from our land in the Texas Hill Country, and native souring bacteria. After extended fermentation and maturation in oak barrels, Colour Five was refermented with Texas blueberries over the course of several weeks. The final refermentation of the beer occurred in bottles, kegs, and casks. Colour Five is 7.1% alcohol by volume, 3.2 pH, and has a finishing gravity of 1.000 (0 degrees Plato). It is unfiltered, unpasteurized, and 100% naturally conditioned.

The label art for Colour Five was created by our in-house artist Josh Cockrell. Josh’s inspiration for the label came from the realm of sacred geometry.