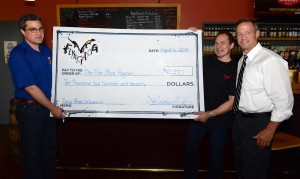 Frederick, MD — On behalf of the watermen of the Chesapeake Bay, Governor Martin O’Malley accepted a donation from Flying Dog and OLD BAY┬« to the True Blue program yesterday in the brewery’s taproom.

A check for $10,270, a portion of proceeds from sales of Dead Rise OLD BAY Summer Ale, was presented to True Blue, which advocates on behalf of the Chesapeake Bay’s 5,500 watermen and promotes sustainably harvested Maryland Blue Crab.

“True Blue is such a worthy program, promoting the sustainability of our Maryland Blue Crab population,” Gov. O’Malley said.

Dead Rise, a collaboration between Flying Dog and OLD BAY to commemorate the iconic seasoning’s 75th anniversary, was released at the beginning of May to unprecedented demand, even before the beer hit shelves.

“The original amount of Dead Rise slated for production was what we believed would be enough beer for the entire mid-Atlantic region for five months,” Flying Dog CEO Jim Caruso said. “In less than two weeks, we sold that amount in Maryland alone.”

And once Marylanders were able to have their first taste, the demand for Dead Rise continued.

“This partnership started as two local businesses joining together to recognize and preserve our local crab industry — an important part of OLD BAY’s heritage for the last 75 years,” Andrew Foust, OLD BAY’s director of marketing, said. “The overwhelming response to this special edition beer is a true testament to our community’s support for the Chesapeake Bay and the distinctive flavors of our hometown.”

Now in its third year, the True Blue program created a $7 million increase in business for local crabbers since its inception.

“We plan to increase public awareness campaigns for both consumers and the food service industry with this donation from Flying Dog and OLD BAY,” Steve Vilnit, head of the True Blue program and director of fisheries marketing for the Maryland Department of Natural Resources, said. “Through True Blue, everyone can know where their crabs are coming from. And increasing this traceability not only helps the watermen, but also allows consumers who want to buy local know that their money is going back to their local fisheries.”

In order for a restaurant to be True Blue-certified, it must prove that at least 75 percent of the crabmeat they use is sustainably harvested from and processed in the Chesapeake Bay region. True Blue empowers the public to buy local through an interactive map of True Blue-certified establishments at marylandseafood.org.

“Supporting local fishermen not only improves the local economy, but also helps to cut the carbon footprint of the seafood we eat,” Vilnit said. “The average consumer can vote with their fork.”

In addition to the beer, Flying Dog also partnered with OLD BAY on the Dead Rise OLD BAY Cookbook, which features recipes from 17 local celebrity chefs who incorporate OLD BAY, and often beer, in new and unique ways. 100 percent of the proceeds from the cookbook benefit True Blue.

Dead Rise will be available on draft and in 6-packs through mid-September in Maryland, Washington, DC, and Northern Virginia. The Dead Rise OLD BAY Cookbook can be purchased through Flying Dog’s website, at the brewery gift shop in Frederick, and the OLD BAYtique in Baltimore’s Inner Harbor.