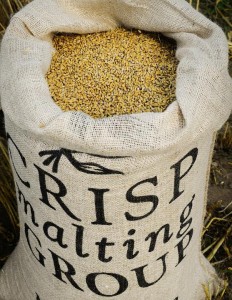 Craft beer drinkers throughout the U.S. could soon be seeing the results of innovation in malt. “Clear Choice Malt” produced by Crisp Maltings reduces haze in cask and bottled beer. It is aimed at craft brewers who are looking to perfect their quality at the same time as lowering energy costs – and increasing brewing capacity!

“For some time our maltsters have been looking for a way to help craft brewers. Many produce great beer but struggle to match the consistent clarity achieved by the larger breweries. This can cause real reputational issues for the craft sector as well as for individual breweries.

“Barley contains proanthocyanidins (a group of flavonoid polyphenols) which cause haze in beer over time. The larger brewers normally undertake the process of colloidal stabilization by either cold conditioning to force haze formation (that can then be removed by filtration) or by using processing aids (to remove potential haze-forming proteins or to remove polyphenols).

“The smaller players can’t afford the investment in expensive equipment and often aren’t keen on introducing additives and processing aids such as silica hydrogel. This means that their beer – which may be perfect as it leaves the brewery – often goes on to develop a haze in the pub even after all the yeast has settled.

“We now have an answer for these brewers,” he says. “We’re producing malt made from a fantastic “proanthocyanidin-free” barley variety. It delivers everything other varieties deliver, but with massive extra benefits.”

Steve says that the results of Clear Choice Malt trials have been impressive: “They’ve demonstrated consistently haze-free beer, more flavor stability, increased yield per barrel and extended shelf-life: all this without the need for additives or treatments. Additionally there are more malty, sweet notes and reduced astringent, bitter notes in the beer produced with it.”

Craft breweries whose production has reached capacity are likely to be interested in the ability to cold-condition beer made with Clear Choice Malt at +4 rather than the usual -1 degrees centigrade. This reduces energy costs and refrigeration time; speeds up throughput and increases capacity. “The savings on energy and the increased production could be worth tens of thousands of pounds to small breweries. For drinkers it means more availability of their favorite beers,” says Steve.

“Clear Choice Malt helps deliver clear, bright and brilliant beers, just as the brewer intended. Clearly something for brewers to consider and drinkers to celebrate!”