Celebrate the launch of a 'cross-country IPA,' with live hip-hop, new merch & a special food menu!

Celebrate the launch of Blockbuster, The Bronx Brewery's new 'cross-country IPA,' with live hip-hop, a new merch collab and a special menu, featuring the team that brought The Bronx to Sweden in October.

New threads from the brewery's collab with Perico Limited will debut, alongside live performances from Bronx-born MC Denzil Porter and DJ JFuse and the acclaimed bites from Empanology. 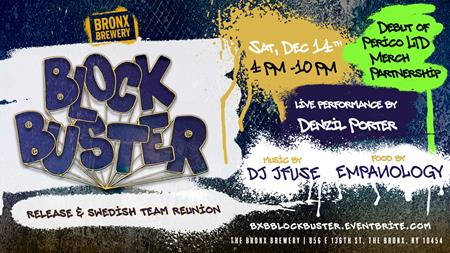 Hosted By:
The Bronx Brewery