The historical Baltic Porter originated as the more familiar Plain Porter – a dark, roasty, top-fermented ale from 18th century England. A stronger Export version was adapted to survive the long ocean journey to port cities on the Baltic Sea – a similar lineage to the Russian Imperial Stout. But the Baltic Porter is unique in that it evolved into a hybrid style all its own, borrowing from lager-brewing tradition of Eastern Europe. Today examples of the style can be found throughout the region from Poland to Estonia, Russia to Finland.

Deep State Baltic Porter represents the more sessionable end of the ABV range for the style at 7.2 percent. This, combined with its smooth bottom-fermented lager character, makes it a dangerously drinkable dark beer. Deep mahogany in color,
it showcases the full-flavored complexity of the style.

Here begins a journey across the cold Baltic Sea, deep into the shadowy corners of the Old World. Sinister forces collude beyond the midnight waters, always felt but never seen. The destination is a land cloaked in conspiracy, where the only secret too delicious to deny is the local brew. Rich toffee, raisin, and fig flavors dominate this dangerously drinkable dark lager. Behold the Deep State! 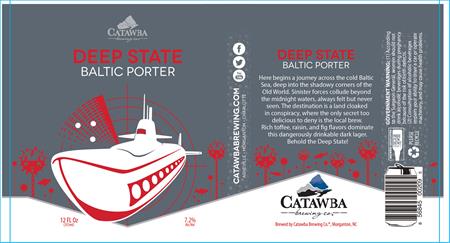