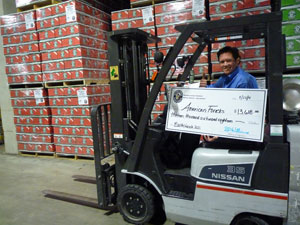 “California remains an area in an incredible need of assistance from years of recent wildfires and we have made it a priority to continue to support an area so similar to our own backyard of Vermont,” states Bret Williams, Woodchuck Cider’s President and CEO. “Our fans in both states enjoy outdoor activities as local economies rely heavily on forests and outdoor recreation — where would we be without trees?”

Global ReLeaf — the tree planting arm of American Forests — is committed to restoring forest ecosystems across the country and around the globe. Global ReLeaf has planted trees in every state in the nation, and in more than 20 countries around the world. Nearly 40 million trees have been planted since the program began in 1990, and the goal has been set to bring that total to 100 million by the year 2020.

Tree planting will begin this summer and continue throughout 2011.

Woodchuck Cider’s Facebook page can be found at www.facebook.com/WoodchuckCider.