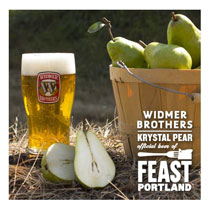 PORTLAND, OR – Widmer Brothers Brewing has brewed a limited-release specialty beer for Bon Appétit Presents Feast Portland, a culinary festival that will be held Thursday, Sept. 20, through Sunday, Sept. 23. Krystal Pear, a filtered American-style Wheat Ale fermented with Northwest pears, will be served at all Feast Portland events.

The festival, a celebration of Oregon bounty, will highlight the creations of top regional chefs, brewers, winemakers and artisans, with all proceeds benefitting two hunger-relief organizations, Partners for a Hunger-Free Oregon and Share Our Strength.

Widmer Brothers, the founding beer sponsor of Feast Portland, partnered with the Pear Bureau Northwest to create Krystal Pear. The ale’s malt bill contributes fresh cereal flavors of grains and malted wheat to the beer. These are balanced by the use of a new hop called Mosaic, which provides flavors and aromas of fruit such as peach and stone fruit, and the addition of Northwest pears offers the perfect complement to round out this specialty brew.

“Widmer Brothers is thrilled to be the beer sponsor for Feast Portland and to celebrate Oregon’s culinary and brewing leadership with this special beer,” said Kurt Widmer, co-founder of Widmer Brothers Brewing. “We wanted to brew a beer that would pair well with the variety of dishes that will be served during the Feast event, but we also wanted to showcase an ingredient that really represents Oregon. Krystal Pear, which is brewed with Oregon’s state fruit, the pear, really hits on both of those points.”

Krystal Pear is an extremely limited-run brew. It will be available at all Feast Portland events as well as at Widmer Brothers’ Gasthaus Pub and select Feast-participating restaurants throughout Portland.

This year’s Feast Portland is the first edition of what is expected to become an annual event. For more information about the festival, visit www.feastportland.com.

What started as a dream for two ordinary brothers who just loved beer has now become a reality for two ordinary brothers who still just love beer. Kurt and Rob Widmer helped lead the Pacific Northwest craft beer movement in 1984 when, in their 20s, they dreamed of brewing unique interpretations of traditional beer styles. In 1986, Widmer Brothers Brewing introduced the first American-style Hefeweizen; today, the unfiltered cloudy beer is the company’s signature brew and one of the best-selling wheat beers in the country. Based in Portland, Ore., the brewery currently brews a variety of beers, including its Rotator IPA Series, Drifter Pale Ale, Nelson Imperial IPA, a high-end Brothers Reserve Series and a full four seasonal lineup. For more information about Widmer Brothers Brewing, visit www.widmerbrothers.com.