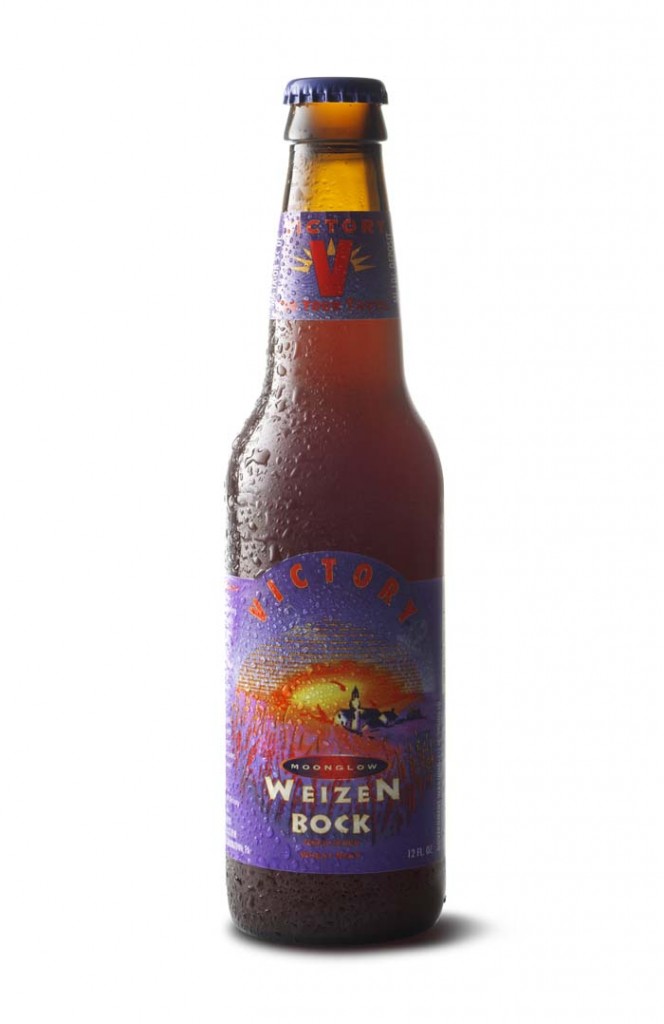 Originating from German brewing tradition, this ‘bock’ beer utilizes German hops and a strain of ‘weiss’ (‘wheat’) beer yeast, which plays a major role in charging the ale with flavors reminiscent of clove, vanilla and honey. As per traditional German style conventions, it is comprised of two different types of malted wheat totaling nearly 60% of the grist among the seven varieties of malted grains employed. This recipe, with its historic roots, revitalizes a refreshing, well-made style of ale that is rare today.

Drinking a Moonglow Weizenbock is much like traveling back in time, due to the strict, age-old, quality controlled brewing process it adheres to. Simultaneously, the brew stands out amongst the current trend of hoppy, American ales with a fresh, exciting flavor profile, driven by malt and yeast. Harvest fruit flavors conjuring fresh apple and pear lead into notes of caramel and toffee, resolving into spicy characteristics that leave a satisfying impression comparable to frothy banana bread in this tempting ale.

Moonglow Weizenbock, has an ABV of 8.7% and is available at craft beer bars, bottle shops, beer distributors and major gourmet grocery stores throughout Victory’s 35 state distribution footprint, with a suggested retail price of $9.99 and will be sold in 12 ounce 4 packs. Use Victory’s Beerfinder to discover a nearby location, or download the free Victory Mobile app for Android or iPhone.

“This beer is a vivid example of what our company is all about — the exploration of German brewing traditions combined with our individual creative ingenuity,” said President and Brewmaster, Bill Covaleski. “Whether clearing new paths or rediscovering old roads via glow of the autumnal moon, this is a product that celebrates the spirit of that journey.”

Victory Brewing Company is a craft brewery headquartered in Downingtown, Pennsylvania. Founded by childhood friends, Bill Covaleski and Ron Barchet, who met on a school bus in 1973, Victory officially opened its doors in February of 1996. In addition to the original Downingtown brewery and brewpub, Victory recently opened a second state-of-the-art brewery in Parkesburg, PA to expand production capabilities and serve fans of fully flavored beers in 35 states with innovative beers melding European ingredients and technology with American creativity. To learn more about Victory Brewing Company visit us on the web at www.victorybeer.com.