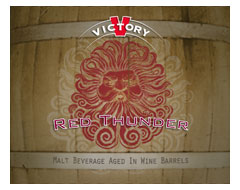 Victory Brewing Company is known for melding traditional styles and unique concepts to produce the highest quality, full flavored beers. Red Thunder does just that. By aging their popular Baltic Thunder in once-used red wine barrels from Wente Vineyards, Victory Brewing Company created Red Thunder. The burnished cocoa creaminess of the Baltic-style porter is accented by the tannic dryness of the wood to produce a rich, fruity final product.

“While enjoying our first batch of Baltic Thunder in 2007, Ron and I immediately sensed that the deep complexities of this nuanced brew left almost no room for improvement,” said Victory Brewing Company President and Co-Brewmaster Bill Covaleski. “But as our experience with Baltic Thunder grew, we became intrigued with barrel-aging it, and red wine barrels proved to deliver the perfect level of flavor enhancement.”