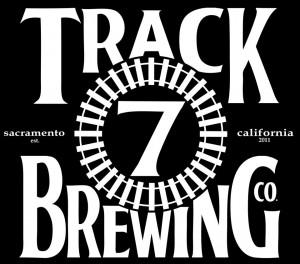 Track 7 Brewing Co. was established in 2011 and has grown from 340 barrels of beer in its opening year to just under 1,200 barrels of beer in 2013. This distribution agreement marks an important milestone in Track 7’s strategic business plan and will allow it to focus on producing craft beer and manage its growth and capital reinvestment during 2014.

According to Ryan Graham, Co-owner, “Track 7 has grown considerably in the last several years. This distribution agreement is critical in order to maintain efficiencies in our delivery model and insure our customers get the freshest craft beer possible.”

“Track 7 brews a consistently quality product and will be a great addition to our craft beer portfolio. We are looking forward to working with them and pleased to be part of their future business plans,” stated Jim Janus, Vice President and General Manager, Markstein Beverage Co of Sacramento.

“Our distribution agreement with Markstein allows Track 7 to better focus on our core business, which is to handcraft the best beer possible,” stated Co-owner Geoff Scott. Scott went on to note, “In order to reach our goals as a production brewery, we need to focus on our growth and expanding our market share. This distribution agreement is the first step in our ability to reach those goals.”

“Track 7 was one of the handful of breweries that started the most recent craft beer boom in the Greater Sacramento region, ” stated John Zervas, Publisher of Hops to Table Magazine. Track 7’s growth and success is a testament to the quality of craft beer it produces, its role as a thriving and responsible member of the local community and its sound business plan.” Zervas continued, “Track 7’s new distribution agreement will make their beer available to more consumers and will move Greater Sacramento one step closer to being a top beer destination.”

Track 7 Brewing Company has grown from four part-time owner/workers in 2011 to 13 full and part-time employees. Track 7’s Panic IPA is one of the most widely sought after IPAs in the Sacramento Metropolitan market.

The Markstein family tradition in beer distribution began in 1919. Markstein Beverage Co. is proud to continue the tradition of providing the highest standards of customer service in the Sacramento region.

Hops to Table Magazine is a regional craft beer magazine covering Greater Sacramento and Chico. Its mission is to celebrate beer: the people who brew it, the people who sell it and the consumers who drink it.