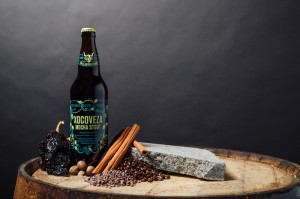 ESCONDIDO, CA — ┬┐Una cerveza con chocolate? A beer with chocolate? ┬íS├¡! The latest collaboration beer from Stone Brewing Co., Chris Banker/Stone/Insurgente Xocoveza Mocha Stout, is a milk stout infused with coffee, vanilla, cocoa, peppers, cinnamon and nutmeg. A creative take on Mexican hot chocolate, the beer was originally developed by San Diego homebrewer and Communications Officer for the Society of Barley Engineers Chris Banker, who submitted his recipe as one of the contenders vying for supremacy at the annual Stone Homebrew Competition & American Homebrewers Association (AHA) Rally held at Stone Brewing World Bistro & Gardens — Escondido earlier this year. Given the cross-cultural twist and Stone’s proximity to Baja California’s burgeoning craft brewing scene, Tijuana-based Cervecer├¡a Insurgente was invited to be a part of the collaboration. Today, the beer will begin arriving in 22-ounce bottles and on draft at retailers, restaurants and bars in select markets nationwide.

In March, 30 eager and creative homebrewers competed for the first-place prize: the opportunity to have their beer brewed on Stone’s large-scale system and have that creation distributed nationally. With the help of attending AHA members and an esteemed judging panel consisting of Stone President and Co-founder Steve Wagner, Brewmaster Mitch Steele, Craft Beer Ambassador “Dr.” Bill Sysak and several Stone brewers, Banker’s Mexican-inspired beer was selected as the champion.

“We’re lucky to have such an inventive and creative pool of participants compete in our annual homebrew competition,” explains Steele. “Just like previous winning recipes, Chris’ beer gave us the opportunity to experiment with ingredients and brew a beer we normally wouldn’t make for a large release. To re-create his recipe, we added cocoa and milk sugar during the brewing process, which gives the beer another level of sweetness. The coffee and additional spices were added to the beer post-fermentation to bring out its unique, up-front flavor and aroma.”

When formulating the recipe, Banker incorporated unconventional brewing ingredients to create a beer emulating the rich, robust flavors of a spiced chocolaty drink, Mexican hot cocoa. Coffee provided by San Diego-based roaster Mostra Coffee, vanilla, and pure cocoa from Southern California’s ChocoVivo gives the brew a sweet, roasty flavor. Cinnamon, nutmeg and a small dose of pasilla peppers create a medley of piquant aromas. The malt bill gives the beer a strong backbone for the various flavors and aromas, while the hops provide the perfect amount of bitterness to balance and harmonize the flavorful diversity.

To fully savor the beer’s complex chocolaty and spicy flavors, Chris Banker/Stone/Insurgente Xocoveza Mocha Stout may be enjoyed fresh or stored at proper cellaring temperatures for months or even years. Over time, the malt character will evolve, making the cocoa and coffee flavors more prevalent. So how do you pronounce this beer’s name? Sho-co-VAY-za. ┬íViva la revoluci├│n de cerveza artesanal! Cheers to the craft brewing revolution!

Founded by Greg Koch and Steve Wagner in 1996, San Diego-based Stone Brewing Co. is the 10th largest craft brewer in the United States. Stone has been listed on the Inc. 500 | 5000 Fastest Growing Private Companies list 10 times, and has been called the “All-time Top Brewery on Planet Earth” by BeerAdvocate magazine twice. The multi-faceted company will be the first American craft brewer to independently own and operate facilities in Berlin, Germany and also has plans to open operations east of the Mississippi. Known for its bold, flavorful and largely hop-centric beers, Stone has earned a reputation for brewing outstanding, unique beers while maintaining an unwavering commitment to sustainability, business ethics, philanthropy and the art of brewing. For more information on Stone Brewing Co., please visit stonebrewing.com or the company’s social media sites: Twitter, Facebook, Instagram, Google+, YouTube, Pinterest and The Stone Blog.