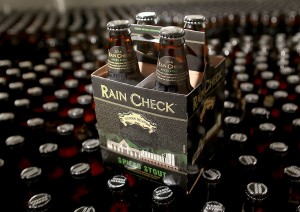 “It’s exciting to have some fun with the new brewery and to make a beer for our neighbors,” says Brian Grossman, co-manager of the Mills River brewery and son of Sierra Nevada founder Ken Grossman. “Getting this place up and online has been a long and challenging project, but now we can focus our energy on making great beer and delivering it to our East Coast drinkers fresher, faster, and with less of an impact on the environment.”

Rain Check Spiced Stout is the brewery’s answer to the merciless wet weather that plagued and slowed construction of the new site since breaking ground in April 2012. Last year, North Carolina had one of the wettest years on record with more than 75 inches of rain followed by bitter cold and snow that dampened construction efforts.

Rain Check is the first specialty beer brewed at the new facility and marks the first of many original beers Sierra Nevada will create with the tastes of the local western North Carolina community in mind. Rain Check with be available in packs of four 12-ounce bottles and on draught in North Carolina, South Carolina, Tennessee, Virginia, and Georgia starting in mid-June.

Sierra Nevada will host a grand opening celebration at the Mills River brewery on Sunday, August, 3, which will be the finale of its seven-city Beer Camp Across America traveling beer festival. Sierra Nevada invited roughly 300 local and regional brewers to pour their beers at the Mills River festival. See the brewer lineup and get tickets at www.SierraNevada.com/BeerCamp.