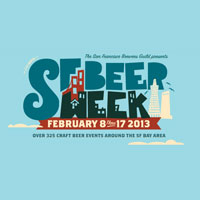 SAN FRANCISCO – The countdown begins! In eighty-five days thousands of people will relish the history, artistry, and above all, the tremendous flavor of craft beer in hundreds of venues across the Bay Area, during the 5th edition of SF Beer Week, from February 8-17, 2013.

It’s hard to believe that what began in 2009, as the second event of it’s kind, with over fifty parties strung together by the San Francisco Brewers Guild, has exploded into over 325 events and beer fans travel from around the World to attend. It’s one of the more highly regarded craft beer celebrations and now serves as a model for the 80+ beer weeks that take place in every corner of this country.

SF Beer Week will commence at the Opening Celebration on Friday, February 8, 2013, inside the East Hall of the Concourse Exhibition Center in San Francisco. Over 65 breweries from Northern California will be serving some of their most sought after beer to 2,500 attendees, who can mingle with brewers and try their latest hop-jammed IPA’s, barrel-aged wonders, and mouth-puckering sour beers that have defined craft beer, shaped it’s culture, and established California’s reputation as a leader in the industry. During the event, attendees will also get to sample some of the finest artisan food made in San Francisco while listening to live music. Tickets will go on sale in December.

After the Opening Celebration, the remaining nine days of SF Beer Week are stuffed with events throughout the Bay Area. Beer dinners, homebrewing demos and meet the brewer nights are just a small sampling of what you can expect. SF Beer Week is a time when venues step up their game and host exceptional events that attract beer geeks, new customers and even manage to convert a few folks to the pleasure of craft beer.

Do you run a bar, restaurant or brewery and want to host an event? Check out our guide on the SF Beer Week website and start planning early. Venues run out of time slots and brewery schedules get booked. Also, the earlier your event is submitted to the SF Beer week website, the more people will see it. If you’re a beer fan and want more events in your neighborhood, tell your local bars and restaurants to participate. The SF Beer Week event portal will be accepting submissions very soon. The first batch of events will go live on December 7th.

We’ve managed to keep the ball rolling and getting bigger each year thanks to the enthusiasm of beer fans and the generosity of our sponsors. SF Beer Week is organized and supported by members of the San Francisco Brewers Guild, fellow Bay Area breweries, industry trade partners, bars, restaurants and members of the media. They help us pay for the marketing, website, print media, Opening Celebration and all the other bells and whistles that make SF Beer Week such a great event. In return, we make sure their brand gets the attention and credit it deserves for being such a valued and supportive member of the craft beer community. If you’re interested in becoming a sponsor, SF Beer Week offers several different packages for businesses and media organizations to consider, which can be found on our website’s homepage. Thousands of beer week enthusiasts will acknowledge your contribution on our website, at the events, in print and on our social media networks. Lend a hand and help us foster the growing movement of local and independent brewers, and the venues that support them.

For more information about SF Beer Week go to www.sfbeerweek.org