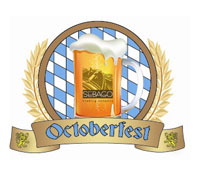 GORHAM, ME – Sebago Brewing Company is pleased to announce the 1st Annual Sebago Octoberfest, to be held under the festival tent at their brewery in Gorham on Saturday September 22 from 12pm – 4pm.

Tickets to the Sebago Octoberfest include a collectable Sebago beer stein filled with 34oz of Octoberfest Lager or other Sebago craft beer (a $20 value), traditional German foods, hourly brewery tours with Sebago brewers, authentic German music with the Octoberfest German Band of Maine, and live local bluegrass from The Tricky Britches, a popular local band with roots in Gorham.

There will also be a costume contest – the best male and female German costumes win a free keg party (a keg of their choice of Sebago beer, a jockey box to serve it with, tap handle, and cups).

Sebago restaurant staff and brewers have been working around the clock to prepare for the event. It is not uncommon to stumble over a bucket of freshly made pickles in the brewery, made with cucumbers from Snell Family Farm in Buxton. Kitchen staff have been fermenting sauerkraut for weeks. The menu includes something for everyone (even vegetarians).

Tickets to the Sebago Octoberfest are $40 in advance and $45 at the door. Tickets can be purchased at any Sebago brewpub (Portland, Scarborough, Kennebunk, and Gorham) or online.