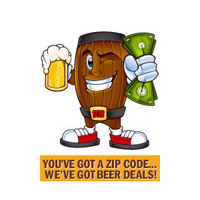 HOUSTON, TX – It’s been two years since SaveOnBrew.com began building its nationwide beer price aggregator. The website went live just as craft brew was coming into favor and retailers were beginning to stock more high-end products to meet the demands of America’s evolving palate. Now brewmasters and beer sellers can access frugal beer drinkers in the tens of thousands that are looking for sales, deals and best prices.

At SaveOnBrew.com, consumers simply enter their zip codes to access the best beer prices, sales and deals in their area. To advertise, beer brewers and retailers may contact site owners directly with information about their beer sales and specials. Additional ad space is available at an affordable price. The site currently averages more than 300,000 page views per month and over 25,000 Facebook fans. New retailers, beer brands and loyal fans are being added daily.

Now pharmacies that had previously shunned beer and alcohol sales are rethinking their approach.

“We’ve had quite a few drug stores who don’t advertise come to us to see how we can partner up,” said Mark Davidson, Director of Operations for SaveOnBrew. “We can offer them direct access to the beer drinker and we like to think of ourselves as the last stop before the beer purchase. Our new mobile application makes our service even more attractive to retailers looking to snag that customer at the list minute.”

“We really couldn’t ask for better exposure,” says Derek Hendrick, owner of Uptown Liquor in Gwinnett, Georgia. “As a small retailer, we had trouble competing with supermarkets and gas stations. We just didn’t have the advertising budget or the prime location that these guys had. But now people can see that the little guys offer the best deals because we are not spending so much to advertise. I’d say our sales have doubled over the past year, thanks to exposure from the site. SaveOnBrew has been a God-send.”

Mike and Mark Lenzi of Franklin Liquors in Massachusetts have also seen increased foot traffic due to SaveOnBrew.com advertising.

“We’re a small family-owned business that sells beer. We’re glad people can finally know our prices are better than our competitors,” the brothers said.

Davidson says that the site is only as good as its partners, so more beer sellers are invited to pass their contact information along.

“Last year, beer sales in convenience stores rose 1.3 percent, totaling more than $16.7 billion in sales,” Davidson explains. “More small retailers are getting into the sale of beer and we want them to know that we’re here to help them get the word out.”

More information can be found at http://www.SaveOnBrew.com.

Founded in 2010 to help thirsty beer drinkers across the United States find the lowest advertised prices for one of the world’s most popular beverages.