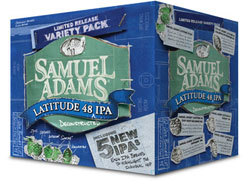 This year, the brewers have taken this beer apart, hop by hop, to create an all-new limited release variety 12-pack—Samuel Adams Latitude 48 Deconstructed, which includes the original Latitude 48, plus five new IPA variations. Each variation is brewed with only one of the five hop varieties, allowing the drinker to experience each type of hops on its own.

The Samuel Adams Latitude 48 Deconstructed 12-pack is available nationwide mid-May through mid- July for a suggested retail price of $13.99.