The new offering, which the company describes as “an aggressively hop forward brew,” is being produced in small batches and only being sold in Boston, Chicago, Philadelphia, New York City, and Washington D.C.

Brewed with six pounds of hops per barrel, Rebel Raw – which is packaged in 16 oz. cans and sold in four-packs — is one of the hoppiest beers Boston Beer has ever produced. It’s also unfiltered and being marketed with a 35-day shelf life to promote freshness.

Boston Beer founder Jim Koch is betting on drinkers’ desire to consume fresh IPAs, and he’s willing pull product back from retailers once the best by date has passed. But here’s the thing — just two years ago, Koch would have never considered putting out such a bold, in-your-face IPA.

When asked in April 2013 by Boston Globe reporter Gary Dzen what he thought about The Alchemist’s Heady Topper and other “massive IPAs,” Koch responded by saying:

“They’re big IPAs. There’s 100 of them. Are they new or interesting? Not really. I mean they’re good, but there’s nothing I’m going to learn from tasting that. There’s not a huge set of skills to make an 80-IBU beer.”

So what caused a change of heart? Brewbound caught up with Koch to learn more about Rebel Raw, the decision to brew a boozy double IPA and the company’s plans to educate distributors, retailers and consumers about beer freshness.

Editor’s note: The following interview has been condensed and edited for clarity.

Brewbound: How does Boston Beer plan to market Rebel Raw and drive sales within the 35-day shelf life window? What’s the pitch to consumers?

Jim Koch: The only thing that really matters is the beer itself. We look to brew the best beer possible because in the end, the drinker buys the beer, not the marketing. Hop character diminishes quickly, especially in IPAs, and we want to make sure that anyone who picks up a can of Rebel Raw tastes a brewery-fresh beer, and experiences the optimal range of hop flavors and aromas. With that in mind, we’re giving it a 35-day shelf life.

BB: How much Rebel Raw was produced?

JK: Rebel Raw is tedious to brew, because of its hop complexity. We brewed a limited number of cases of Rebel Raw, and once they’re gone, they’re gone. 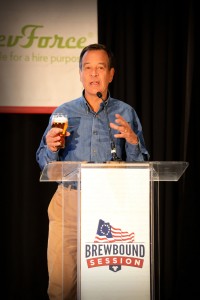 Jim Koch presents at the Brewbound Session in May, 2013

BB: Rebel Raw is only going to a few markets to start. How did Boston Beer select those markets? What were the criteria? Are there plans to distribute it more broadly going forward?

JK: We only brewed a small batch of this beer, so we had to limit how many cities we could offer the beer to. Boston, New York, DC, Philly and Chicago all have really strong craft beer communities and we hope drinkers in those cities are excited to try Rebel Raw. Right now, there are no plans to distribute it more broadly.

BB: How frequently will Rebel Raw be produced and distributed? Is this going to be year-round or more of an occasional one-off batch?

JK: As of right now, we aren’t really sure. Our brewers loved this beer so much, so now we are just excited for drinkers to try it, and let us know what they think.

BB: How does Boston Beer plan to work with field reps and distributor partners to ensure the product is fresh and pulled from store shelves after it is “past code?” Is there some kind of replenishment or reimbursement program for retailers?

JK: First, we don’t anticipate having to pull any! We’ve already heard that drinkers are on the hunt for it here in Boston knowing that this beer is very limited. If that’s not the case, we will work with our retailers and buy the beer back as we always do. Freshness is a critically important component of beer quality and we’ve always made freshness our main priority. In the late 1980s, I used a hand saw to notch beer labels and denote an “enjoy before” date. We’ve continued to beat that drum to educate drinkers about freshness. We’ve also checked our beer on the shelves to ensure that it is fresh and if it’s not, we buy it back and replace it with fresh Samuel Adams beer.

BB: Was the decision to package in 16 oz. four-packs a conscious one? Just a couple years ago the idea of a huge double IPA, in cans, from Samuel Adams would have been unimaginable. What changed?

JK: We felt the 16 oz. cans made for the best drinking experience for this particular beer and it’s hard for anyone to predict the unimaginable. Twenty years ago, no one would have fathomed beer-aged in barrels. Ten years ago, no one would have anticipated a beer that weighed in at 29% ABV. Two years ago, who would have guessed we’d be designing a new, innovative can? We always plan on trying new things in the spirit of innovation, exploration, and bringing drinkers the best drinking experience possible.