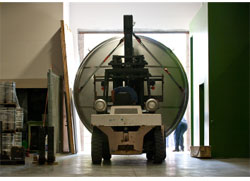 To continue to trump demand and position the funky brewery for another explosive year for craft canned beers, the brewery will further its infrastructure while brewing more consistent quality beer than ever before. Two 200 BBL fermenters were installed today, as was a Wort Receiver, which will allow 20 percent more brews per day. In February, the brewery installed a 200 BBL fermenter and a 200 BBL bright tank as well as a new keg line and Hi-Cone six-packing machine. Oskar Blues was scheduled to have the two tanks delivered in March but plans went awry when they were damaged in transit. The two 200BL replacement tanks for damaged tanks are scheduled to arrive next month.

Oskar Blues Brewery has, so far, earned four Gold Medals for their beers — Dale’s Pale Ale, GUBNA, Old Chub, and G’Knight — submitted to the World Beer Championships. With GUBNA taking a gold, the brewery has officially received gold medals for each of its enormous three-dimensional beers stuffed in cans.

Below are the individual Gold Medal details for each of Oskar Blues’ winning beers:

The World Beer Championships (www.tastings.com), founded in 1994, is America’s oldest international beer competition and is open to all commercially produced beers from around the world, regardless of US distribution. It is a medal-based competition that awards its medals based on the proprietary blind tasting methodology developed by the Beverage Testing Institute (BTI) and bands of the consumer accepted, 100-point quality rating scale.

Oskar Blues is honored to have received these awards and is proud of their roots and EVOLUTION. Set in the heart of Colorado craft beer country, Oskar Blues Brewery in Lyons began canning its beers in November of 2002 with a hand-canning line in the 60- year-old barn next door to their funky little brewpub. Although it’s now a full- throttle canning operation that is quickly expanding its cult-like following across the nation, Oskar Blues remains true to its original mission of simply blowing minds with what can come out of a can of beer.