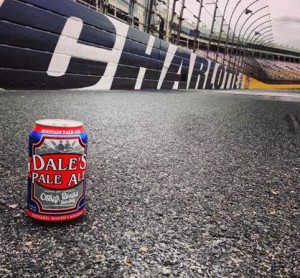 Longmont, CO and Brevard, NC — Fast cars and great craft beer are teaming up for the first time ever at the Charlotte Motor Speedway (CMS)—NASCAR center of the universe. This is an historic partnership between America’s hometown sport and Oskar Blues all-American made beer.

America’s first canned-craft beers, brewed in beautiful Brevard, NC, are already winding their way down from the mountains for Speed Week, which kicks off the race season with a roar the week before Memorial Day.

“We are so excited to welcome Oskar Blues here. As a facility, this ensures we deliver the best products and experience for our fans, and Oskar Blues provides that,” says Brandy Mills, CMS business development director.

OB Founder Dale Katechis says: “We just like getting after it and being competitive. Whether it’s our complex and challenging beers, the aggressive mountain bikes our bike company (www.reebcycles.com) makes or going to the race trackÔÇªspeed is in our blood.”

More than 1.5 million racing enthusiasts visit the Speedway annually, and those folks CAN now be craft beer enthusiasts too.

For more about anything and everything Oskar Blues, contact Chad Melis, chad@oskarblues.com or Anne Fitten Glenn, af@oskarblues.com.

Since opening in 1960, Charlotte Motor Speedway has established itself as The Greatest Place to See the Race, offering a lifetime of memories for race fans around the world. This year, the Speedway will host three NASCAR Sprint Cup Series events and be open for more than 100 event days.