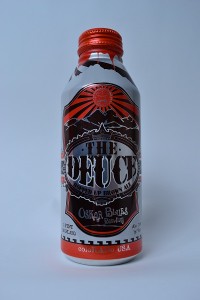 LONGMONT, CO – Colorado-based Oskar Blues Brewery and Indiana-based Sun King Brewery have created “The Deuce”, their second CANlaboration project to unite the brewer’s friendship and passion for pushing the boundaries of craft beer in a can. The Deuce is a limited-release Hopped-Up Brown Ale and the second craft beer (following the pair’s CHAKA Belgian-Style Ale release) to be packaged in the Alumi-Tek┬« re-sealable pint bottle from Ball Corporation. Limited quantities of the Hopped-Up Brown Ale will be available at Oskar Blues locations (Tasty Weasel Taproom, Home Made Liquids & Solids, Grill & Brew) and in Sun King’s home market during the 2012 Great American Beer Festival week while supplies last.

Similar to the CHAKA CANlaboration the breweries incorporated a blend of ingredients from each brewery’s home state. As made popular by Sun King’s GABF medal winning “Popcorn Pilsner” Riehle’s Select Gourmet Popcorn from Indiana was used in tandem with Colorado Malting Company’s Belgian Pale Malt in the mash. The end result is a 7 percent A.B.V., 69 I.B.U, Hopped Up Brown AleÔÇªthink and smell India Brown Ale. The assertive hop aroma is roused from 100% Galaxy hops; three additions in the kettle, one in the whirlpool and dry hopped with one-pound per barrel. The Australian hop known for aromas of citrus and passion fruit contribute to the German chocolate malt presence creating a dry and smooth bitterness not often found in a brown ale.

The connection between these two breweries is deeper than the fact that they both can their beer and collaborated on the first ever craft beer in the Alumi-Tek bottle (CHAKA). Oskar Blues head brewer, Dave Chichura, began his professional brewing career in Indianapolis fifteen years ago where he became friends with Dave Colt and Clay Robinson, the two brewers who created Sun King. The three friends have been talking for years about working together on a collaborative beer, so when the opportunity came to continue to push the boundaries of the craft can package it was an easy yes.

Join Oskar Blues Brewery at the “It’s All about the Package” release party following the Great American Beer Festival at the Blake Street Tavern for a NEW can package release and live music by Halden Wofford and the Hi-Beams.

Check out all the details of Oskar Blues’ GABF week here: http://www.oskarblues.com/blog/greatamericanbeerfestival2012

Founded by Dale Katechis in 1997 as a brewpub and grill, Oskar Blues Brewery launched their craft-brewed hand canning operations in 2002 in Lyons, Colo. They were the first American craft brewery to can their beer. Today more than 180 craft breweries are canning their beers. The original crew used a hand-canning line on a tabletop machine that sealed one can at a time. Oskar Blues Brewery in Longmont packaged 41,000 barrels in 2010, grew to 59,000 in 2011 and is on pace for 90,000 in 2012. While celebrating 10 years of Dale’s Pale Ale the brewery has announced it will begin brewing beer in their new Brevard, NC brewery in December 2012. Visit www.oskarblues.com/ for more information.

Sun King Brewing Company is the brainchild of Dave Colt and Clay Robinson. With the help of family and friends — Omar Robinson, Andy Fagg and Steve Koers — the first keg of Sun King beer rolled out the door for delivery in July 2009. Sun King is the first full-scale production brewery in Indianapolis since Indianapolis Brewing Company closed its doors in 1948. Now available on tap and in cans at hundreds of locations around central Indiana, Sun King has grown into the third-largest beer brewer in the state of Indiana. The company’s commitment to handcrafted seasonal and specialty beers has been rewarded with multiple medals at the Indiana Brewers Cup, Great American Beer Festival and World Beer Cup competitions. Visit www.sunkingbrewing.com for more information.