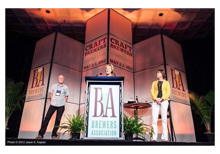 FORT COLLINS, CO — Odell Brewing Company’s three founders were honored in San Diego at the annual Craft Brewers Conference. Doug, Wynne, and Corkie Odell received the Brewers Association Recognition Award for their support of the industry as a whole, their long time commitment to local philanthropy and support of the homebrewing community, and their inclusive company culture. It was the first time in ten years that the award was presented to multiple recipients.

“We have loved growing our brewery over the last 23 years,” said Corkie Odell, “and it is a thrill to be given this award by our brewery peers.”

“The World Beer Cup…where else can such diverse brewing professionals sit down to a beer dinner that has been paired with delicious gourmet food while celebrating our similarities and differences,” said Bill Beymer, Head Brewer for Odell Brewing. “It’s great that our beers have been recognized as outstanding with such fierce competition from the world over.”

Founded in 1989, Odell Brewing was started by Doug Odell, his wife Wynne, and his sister Corkie. Twenty-three years later, the culture of family and collaboration still thrives fostering a brewery full of beer-centric people. It is this passion for beer that inspires Odell Brewing to create quality, hand-crafted, innovative brews. As a regional craft brewery, Odell Brewing is committed to serving the communities in which it distributes by sourcing local raw materials, and through its charitable giving program known as Odell Outreach. Odell Brewing was recently named a “Top Company of 2010” by ColoradoBiz Magazine and is an award winning brewery, nationally and internationally: 2012 World Beer Cup┬« – Silver for IPA. 2011 Great American Beer Festival┬« – gold medal for Friek. 2010 North American Beer Awards — gold medal for Woodcut No. 3. 2009 BrewNZ Awards — gold for 5 Barrel Pale Ale. 2008 World Beer Cup┬« — gold for IPA. 2007 Great American Beer Festival┬« — gold medal for IPA.