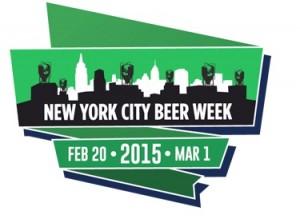 Last year’s sold-out Opening Bash 2014 at Vanderbilt Hall (Grand Central Terminal) brought 800 craft beer enthusiasts together to experience NYC’s top breweries pouring the finest ales Gotham has to offer amidst the historic hall’s Beaux Arts grandeur. For 2015, the New York City Brewers Guild partners for the first time with the New York State Brewers Association. The Saturday, Feb. 21 afternoon session showcases new and rare releases from 20 Guild breweries and 10 NY State breweries, and local food vendors will be paired with each brewery. An official NYC Beer Week 2015 map will be distributed featuring an incredible array of events taking place at the City’s foremost bars, restaurants, and retailers throughout Beer Week. Following the Opening Bash, the Brewers Guild encourages patrons to go out and Celebrate An Entire City of Craft Beer! The location of the Opening Bash 2015 will be announced in the coming weeks.

Several new attractions are lining up for NYC Beer Week 2015, including the nationwide competition, “Ruppert’s Cup”, which is open to all craft breweries. The “People’s Choice” voting competition for the “Best Brewery @ NYC Beer Week” commences at the start of Beer Week, and the winner will be announced at the Closing Party (location TBA) on Sunday, March 1, 2015. In honor of Jacob Ruppert, Jr., the Brewers Guild resuscitates the Ruppert’s Cup that circulated around to different NYC breweries in the 1990’s vying for “Brewery of the Year”. A celebrated American brewer, US Congressman, and owner of the New York Yankees (1915 – 1939), Ruppert’s name will appear front-and-center on the newly designed trophy destined for one standout brewery. Participants are required to host a valued-added Beer Week event highlighting an extremely rare beer release or a Meet-the-Brewer event. Craft beer fans can cast as many votes as they like to get their favorite brewery to be a front-runner (votes are $5 a piece) on www.nycbeerweek.com; all proceeds will be donated to NYC’s City Harvest.

“If they want to win the Ruppert’s Cup, breweries from around the country need to bring their A game,” says Kelly Taylor (President of the New York City Brewers Guild, Co-Founder/Brewer at KelSo Beer Company, Brewmaster at Heartland Brewery). “I know for sure the 20 Guild brewers will be hard at work representing NYC. It’s a very ‘New York’ kind of competition, to bring back this prized trophy and have a good ol’ fashion throw down to see who’s the best brewery at NYC Beer Week. I’ve done a lot of charity projects with City Harvest, most recently the Edible Ale event where we raised $10,000 by selling 10,000 hot dogs. February is a cold month, and a lot of people are in need of a hot meal. I’m sure every year moving forward we’ll have a different state take home the trophy. It’ll be a blast to see who wins it first!”

On Friday, Feb. 20, 2015, NYC Beer Week 2015 kicks-off with Opening First Tap, which features 100 rare beers at 100 NYC beer destinations. The singular collection includes craft beers you can only get in NYC that night. Breweries from around the world are encouraged to participate, and all beers will be tapped together at 7 pm.

On Wednesday, Jan. 21, 2015, join the Brewers Guild for an exclusive happy hour for members of the press at Heartland Brewery (Empire State Building) as they announce additional boutique beer events happening throughout NYC Beer Week 2015; rare and obscure beers from each of the 20 Guild breweries will be available for tastings. The Press Preview Happy Hour runs from 6 pm – 8 pm; please RSVP directly to Jesse P. Cutler at jesse@jpcutlermedia.com.

The mission of the New York City Brewers Guild is to advocate for and promote awareness of its local brewing members; to increase the visibility of local beers through innovative events, programming, and consumer education; and to foster a healthy, ethical, and growth-focused craft beer industry throughout the city. The New York City Brewers Guild is a 501[c]6 non-profit founded to advance New York City’s brewing industry — and thereby lessen human misery. The 7th Annual New York City Beer Week continues a beloved citywide celebration of the breadth of exceptional craft beers from around the region and around the world!