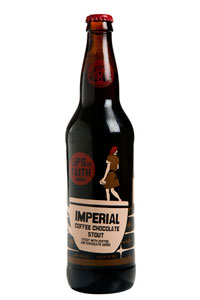 FORT COLLINS, CO – New Belgium Brewing’s Lips of Faith Series is rolling out its fourth and final round of Lips of Faith beers for 2012. The selections are Imperial Coffee Chocolate Stout and Biere de Garde, a collaboration ale with Michigan-based Brewery Vivant.

New Belgium recently began selling its products in Michigan, affording the opportunity to collaborate with Grand Rapids-based Brewery Vivant. The breweries first worked together to create Escoffier, which was met with high regard, and now they’ve created a beer for the Lips of Faith series.
The bright and refreshing Biere de Garde ale has a citrus bite from the peels of oranges and bergamots, reinforced with Sorachi Ace hops. The copper-colored beer is brewed with pale malt, oats for creaminess, and a hint of clove from Vivant’s house yeast, which brings a spicy bite to the finish. Alcohol by volume: 9%.

To read more about the friendship that has formed between the breweries, visit http://www.newbelgium.com/Community/Blog/12-09-13/Dear-Brewery-Vivant.aspx and http://www.breweryvivant.com/index.php/blog/.

Another match made in heaven — coffee and chocolate — is showcased in New Belgium’s other Lips of Faith selection, Imperial Coffee Chocolate Stout. This strong stout is packed with Fort Collins’-own Cafe Richesse espresso, brewed with roasted barley and Midnight Wheat Malt, and spiced with fair trade cocoa nibs. The beer is an extra dark color with a mocha-colored head. Alcohol by volume is 10%.

“Lips of Faith has become a perfect venue for collaborating with brewing brethren around the country,” said New Belgium brewer Grady Hull. “We’ve always been inspired by Brewer Vivant’s beers and this collaboration speaks to our mutual respect.”

“Our Imperial Stout answers the call for beer drinkers seeking the rich, full character of a coffee stout,” added Hull. “The coffee and chocolate combine to offer a bold flavor with a warming brace of alcohol for those cold winter months.”

Imperial Coffee Chocolate Stout and Biere de Garde will be available in November within select markets. Pricing varies by location.

The Lips of Faith series features New Belgium’s more esoteric and palate-elevating creations. The beers are only available in certain locations and for about three months, or as long as supplies last.

To find New Belgium beers in your area, you can use the New Belgium Libation Location tool. You can also follow New Belgium on Facebook and Twitter.