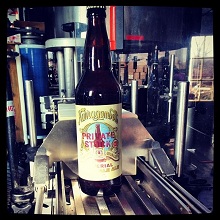 PROVIDENCE, RI — The Famous Narragansett Beer is celebrating its storied 122 years in business with a limited-edition Imperial IPA, offering ‘Gansett fans a bigger-bodied brew and expanding its offerings in the craft brewing segment.

Released in a 22-ounce bomber bottle, the IPA is a departure from the brand’s signature 16-ounce Tallboy cans, but still chock-full of references to Narragansett’s anniversary. The label is styled after an early Private Stock Ale label used by the company when they began brewing ales in the late 1890s, which underscores ‘Gansett’s heritage as one of the original craft brewers in New England.

The Imperial IPA was crafted with the best of American and German ingredients as a nod to the “original six” German-American founders of Narragansett. Summit hops were used for all the kettle hopping, and a mix of Northern Brewers, Hallertau, Tettanager, and Sazz hops were used for dry hopping, resulting in an IBU of 122 to celebrate 122 years of Narragansett history.

“We have a number of reasons to raise our glass this year,” says CEO Mark Hellendrung. “Each anniversary is a reminder of where the brand has been and where we’re headed. It is an amazing feeling to help revitalize a cultural icon such as Narragansett and to watch it thrive again.”

Narragansett’s 122-year timeline is steeped in rich heritage and history. The beer brand was the first ever to sponsor a national sports team, serving as the title sponsor for the Boston Braves and The Boston Red Sox for several decades. In its glory days, Narragansett was the largest brewer and top-selling beer of New England, producing nearly two million barrels of beer per year at its Cranston, R.I., brewery. A cornerstone of New England culture, the brand gained notoriety among audiences far beyond the region through its ubiquitous slogan: “Hi neighbor, have a ‘Gansett!”, whimsical branding by Dr. Seuss, and timeless product placements, such as an appearance in the original release of Jaws.

However, the company experienced some major setbacks, as well, including the closing of the Cranston brewery in 1983. Since the brand’s revival in 2005, ‘Gansett has been on a rapid growth trajectory, ranked in 2012 as one of the Top 50 brewers in the country by the Brewers Association. Based on this recent business success, the company is slated to break ground on a new brewery to open in Rhode Island in 2013.

For further information on the Narragansett IPA or to find a retailer near you, visit: www.narragansettbeer.com.