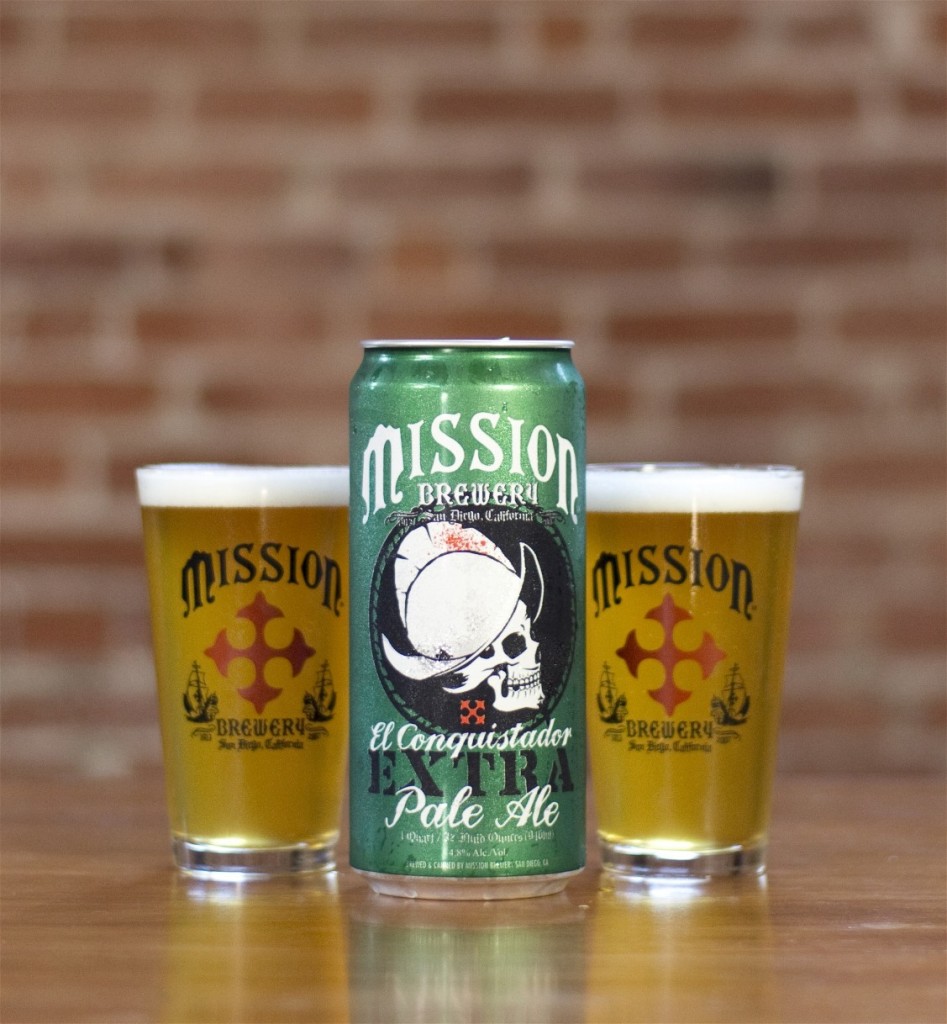 San Diego, CA — Mission Brewery is now releasing two of its beers in a new 32-ounce can.

The first quart can to be used by a US microbrewer, Mission’s quart “Cannons”

The move to quart cans came about earlier this year when Mission founder Dan Selis was in a meeting with his local distributor. “One of their staff,” Selis recalls, “said, ‘I’m waiting for a microbrewery to get off its ass and put out a beer in an oil can like Fosters.’ After the meeting I couldn’t stop thinking about that.”

Selis and his staff accepted the 25-oz can challenge, only to discover Ball Packaging’s new quart can. The 32-oz can allowed Mission to take the bigger-can idea up several more ounces and it fit with Mission’s goals.

“We’re always looking for ways to make better beer and have more fun,” Selis says. “And we like the benefits of cans and had been thinking about using them. The quart can meant we could hit those two goals and embrace aluminum cans in a fashion that smashes the status quo.”

”The idea of our luscious beers in a gigantic quart can cracked us up,” says Martin Saylor, Mission’s national sales director, “and no microbrewery has ever done them before. We couldn’t resist the idea. Now we’re the little brewery with the huge package. And great beer.”

El Conquistador is a low-alcohol hoppy showcase. It sports the hop charms one expects in an IPA, but in an ultra-quaffable ale of just 4.8% ABV. Complex, thrilling and sublimely drinkable, El Conquistador is built with pale malts, a touch of crystal malt, and a few treasure chests of Centennial and experimental hops.

Shipwrecked Double IPA delivers the unctuous hop punch you’d expect in a West Coast IIPA, but with an equally hearty compliment of malted barley. The beer is lush with pine, citrus and candied grapefruit notes from a hop blend that includes Cascade and Magnum hops. These charms meld with chewy caramel notes, a velvety body and a slow bite of finishing hops. The beer is 9.25% ABV.

“Shipwrecked is a session beer, too,” Egan says with a grin. “For a very long session.”

Like all cans, Mission’s quart cans offer full protection from light and oxygen damage, are welcome in places bottles aren’t allowed, and help Mission shrink its carbon footprint for shipped beer. “But our cans,” he adds, “also deliver two full pints of our beer. So Mission fans get a big-volume beer in a lightweight, ultra-portable, infinitely recyclable, freshness-keeping cylinder.”

“They’re also pretty hilarious to see,” Saylor adds, “and make for a unique and jarring presentation for our small-batch beers. Our retailers are very excited about them.” The cans are filled on a Cask Brewing Systems machine that was custom-built for Mission and the 32-ounce cans.

“Craft brewers,” says Ball Packaging’s Jerod Brody, “are incredibly creative in finding ways to make their brands stand out, and few packages make a bigger impact than our 32-oz can. Not only does it provide a huge 360-degree billboard for branding, it’s also shareable and encourages socializing with friends.”

Mission Brewery is located in an 1894 structure in downtown San Diego, on the edge of the city’s popular Gas Lamp District. In the mid 1900s, the building (now on the National Historic Register) served as a Wonder Bread bakery.

The building is also home to Mission’s popular tasting room, which features a pair of lengthy bars, one of which allows customers to drink within reach of the brewers and their brewing equipment. The brewery’s name is a nod to one of San Diego’s first breweries, founded in 1913 and shuttered when Prohibition began.

For details on the beers, photos, samples and other info contact Marty Jones at 303-860-7448 (home office), 720-289-9345 (cell) or martysjones@att.net. Learn more about Mission Brewery at www.missionbrewery.com