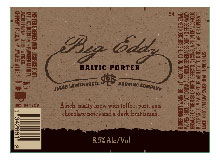 Big Eddy Baltic Porter creates a warming blanket of malt flavor with seven select malts, including Munich, Crystal Rye, Roasted Barley, Special B, Chocolate malt and a blend of Pale malts. The beer is interwoven with notes of toffee, cocoa, caramel, toasted bread and sherry fruit flavors, creating a brew bold in character, yet remarkably balanced with an ABV of 8.5 percent.

“This brew is crafted in small batches to maintain the premium characteristics of a Baltic Porter,” said Jake Leinenkugel, fifth generation brewer and president of the Jacob Leinenkugel Brewing Company. “Baltic Porter is a perfect choice for the cooler weather ahead, and it pairs extremely well with grilled red meats, aromatic North African cuisine, rich stews, toffee and cocoa deserts.”

Leinenkugel’s Big Eddy Baltic Porter features red and copper hues that shine through the dark shade of this opulent beer. As this Big Eddy warms it will open up to its full complexity and reveal its dark stone fruit notes of cherries, plums and raisins on top of licorice root, which adds a subtle sweetness to the aroma and adds a touch of spicy complexity within the layer of cocoa, molasses, toffee, plum and pumpernickel from the malts.