Move over Corona, you’re no longer the only beer selling the beach lifestyle.

The new television spots will begin airing this month in urban beach communities like San Diego and Los Angeles as well as Orlando and feature two Hawaiian brothers commenting on “common mainlander customs,” like multi-tasking and the brevity of happy hour.

“The ‘Dear Mainland’ campaign truly captures the unique Hawaiian spirit of Kona Brewing and, in a fun way, delivers our message that reconnecting with family, friends and community is what truly matters,” Kona’s brand manager, Aaron Marion, said in a press statement.

The announcement comes just five days after CBA released weaker-than-expected first quarter earnings, which triggered a 12 percent drop in share price. Despite missing the consensus estimate of $0.04 earnings per share, company revenues increased nearly 20 percent to $47 million for the quarter.

Overall shipments for CBA increased 17 percent in the first quarter, led by a Kona brand that saw total depletions of 11 percent for the quarter. Longboard Lager and Big Wave Golden Ale were up 13 percent and 36 percent, respectively, so it makes sense that CBA would push behind its strongest and most profitable brand.

The company used a variety of factors, including the consumer connection to Hawaii, to zero in on the three cities where television ads will air, Marion told Brewbound.

“We wanted to advertise in cities that have the product in multiple outlets so consumers can go to a store and quickly find it,” he told Brewbound. “We looked at what our strongest markets were and factored this into the decision as well.”

Two new ads, both of which were shot on the big island of Hawaii, will run throughout the summer and promote Kona’s Big Wave Golden Ale and Longboard Lager brands. Additionally, CBA plans to promote the “Dear Mainland” campaign across radio, online and billboard platforms. 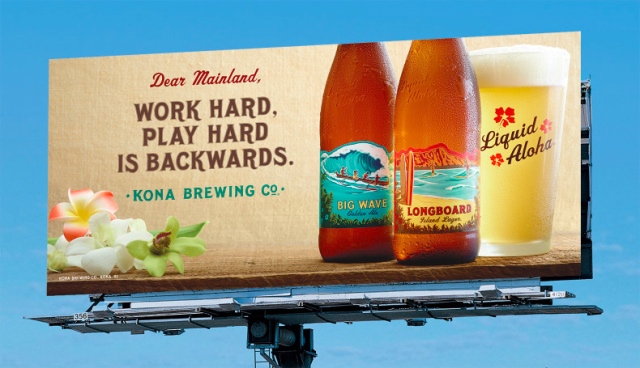 For CBA, the new campaign represents the best opportunity to attract new customers to the Kona brand as well as the “single most important factor” in achieving its 2014 growth projections, Marion said.

“We’re confident that the campaign’s message is not only going to resonate with consumers on the mainland, but also get them to try our world famous Liquid Aloha brews,” he said in a statement.

To coincide with the launch of the new campaign, Kona has also reinvented its tagline to read: “One life, right? Don’t blow it.”

“Our campaign encourages overworked mainlanders to take a more Hawaiian approach when it comes to work/life balance,” said Parker Channon, the executive creative director on the project.

Marion told Brewbound that the “Dear Mainland” campaign is the “single biggest marketing investment in CBA history,” and represents an “overwhelming majority of the total Kona brand budget.”

If successful, CBA said it would consider extending the marketing efforts to its Widmer, Redhook and Omission brands.

“With this being CBA’s first push into true mass media advertising, we are extremely hopeful that we see substantial business growth due to the campaign,” said Marion. “If this comes to fruition, we have all intentions of expanding this initiative for Kona and evaluating similar marketing strategies for our other market leading brands.”