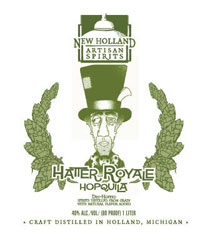 PHILLIPSBURG, NJ — Hunterdon is excited to announce a new addition to their portfolio of micro-distilled and hand-crafted spirits. On October 1, 2012 they will begin distribution for New Holland Artisan Spirits from Holland, Michigan. The inaugural release will feature two of their most popular products, Knickerbocker Gin and Hatter Royale Hopquila, with other varieties on the horizon for the year ahead.

In September 2011, the team added an eighty year-old, 600 gallon still to their production line. Originally built in New Jersey to make apple brandy, this historic still was shipped to Kentucky where it was refurbished by the last operating coppersmith in the US. It is now a critical part of New Holland’s unique line of spirits.

Embraced as “hops in spirit form”, Hatter Royale Hopquila is a “must-try” for craft beer drinkers. The addition of hops after distillation contributes to the agave-like qualities exhibited in this un-aged whiskey produced from 100% barley.

Their Knickerbocker Gin has become known as the “New Western Gin” in the industry. With a soft and balanced approach, Knickerbocker is very well-received by gin drinkers and makes for a terrific base in a variety of cocktails.

New Holland currently distributes both beer and spirits to ten US markets. Hunterdon began distribution for New Holland’s craft beer portfolio in September 2009 and is proud to welcome their line-up of artisan spirits to the Garden State.
Consumers can expect to see product on store shelves by early October. Stay tuned with Hunterdon on Facebook and Twitter and on the company’s website for more information.

Hunterdon has raised the bar for craft beverage availability and selection in the state by providing the most diverse and sought-after portfolio the market has to offer. Founded in 1996, the company currently represents over sixty domestic craft brands, hundreds of imports and a unique line of micro-distilled spirits, sakes, ciders and meads. Owners Mike Short and Dave Masterson continue to focus on bringing quality products to the New Jersey consumer.