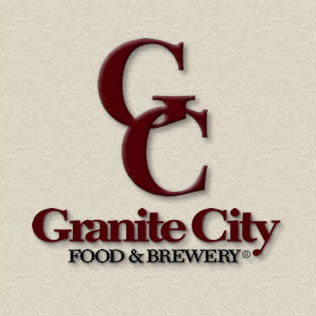 MINNEAPOLIS, MN — Granite City Food & Brewery (Nasdaq: GCFB) today announced the launch of a bottled beer line in retail stores outside of their 26 restaurants throughout the Midwest. Through its patented beer processing system, Granite City has been developing and brewing some of the best handcrafted beers available throughout the region.

Today, Granite City ranks as the #6 largest Brewpub Group in the United States with approximately 600,000 gallons of beer sold in 2010. The company has partnered with distributors to have its beers bottled and available for sale in liquor stores and grocery stores in states throughout the Upper Midwest area.

The announcement today expands on the company’s continuing use of its patented beer process. Earlier this month the company announced that its beer would be offered in the Xcel Energy Center, home of the Minnesota Wild, with more venues expected in the future.
“We are very pleased to build on our strategy of providing our handcrafted beer to our loyal consumers in locations outside of our restaurants,” said Steve Wagenheim, President and Founder of Granite City. “Over the years our beers have become some of the best handcrafted beers in the area having won numerous awards. We see this as a great branding strategy for our restaurants with the opportunity to create many more loyal customers of our fine handcrafted beers.”

The company will begin to sell three of its hand crafted beers in retail outlets in the Twin Cities, St. Cloud, Sioux Falls, Fargo and various Kansas markets beginning in April 2011. The inaugural batch to be bottled will include Northern Lager, Duke of Wellington and Brother Benedict’s Bock, three of the company’s most popular beers. This inaugural batch will have a special “first-run” designation on each bottle. The hand crafted beers will be bottled at Minhaus Brewery in Monroe, Wisconsin.

Associated Brewing Company (ABC) will be importing and selling the beer, in addition to handling other logistical and invoicing items for Granite City. ABC, in turn, will sell the beer to various distributors who will work with retailers throughout Minnesota, South Dakota, North Dakota, Iowa and Kansas.

“Wirtz Beverage Minnesota Beer Inc. is excited to partner with Granite City in offering high quality craft beer to the Minneapolis / St. Paul metro area,” said Scott Cairncross, Vice President of Wirtz Beverage Minnesota. “We are pleased to grow our relationship with Granite City by acting as their distributor for bottle beer, in addition to our current relationship with their arena beers.”

“We’re proud to present the new Granite City bottled beer line,” said Steve Wagenheim. “Whether they’re dining at one of our restaurants or spending an evening at home, fans of the Granite City brand can now enjoy a great handcrafted beer whenever they like.”

Brewbound Podcast: How to Refresh Your Brand Without Alienating Your Consumers