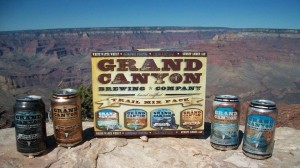 Phoenix, AZ—Arizona craft beer lovers can’t wait for Arizona Beer Week to make a splash this month and the Grand Canyon Brewing Company is making sure that thirsty fans have plenty of chances to taste, sip and savor their award winning and seasonal brews. They’re so excited in fact that they’re participating in pre, during and post Arizona Beer Week events!

Here’s the full lineup of the Grand Canyon Brewing Company’s planned tap takeovers, festivals and tastings across the valley:

GCB will represent at the Strong Beer Festival pouring samples of their Winter Bourbon Barrel Brown, Shaggy Bock, and Hop Bomber at 1:30 p.m. and 3:30 p.m.

1707 in Tucson will feature a tap spotlight of GCB brews including Shaggy Bock, Black Iron IPA and Hop Bomber from 8-10 p.m.

Alex from GCB will host a tasting event at Whole Foods Mayo from 6-9 p.m. featuring Starry Night Stout, Shaggy Bock and Black Iron IPA. Each will be available for purchase and for growler fills.

Exclusive tapping of GCB’s collaboration brew, Ruby Red Pale Ale and Shaggy Bock at the Monastery in Mesa from 8- 10 p.m.

For more information about Arizona Beer Week and to get the full details for each event including address, phone numbers and websites for each event visit http://arizonabeerweek.com.

The Grand Canyon Brewing Company is located in historic downtown Williams, AZ at 233 W. Route 66. This family owned and operated microbrewery produces a dozen different specialty craft brews each year. They recently began production on a new 22 oz Bomber bottle featuring their revolutionary new Flavor Bomb beer flavoring widget. For more information about the Grand Canyon Brewing Company, visit online at www.grandcanyonbrewery.com and be sure to “like” us in Facebook atwww.facebook.com/grandcanyonbrewery.