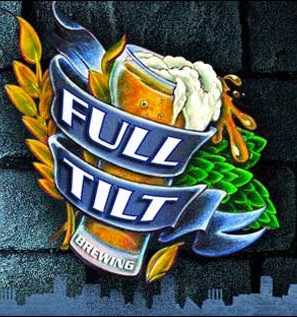 BALTIMORE — Full Tilt Brewing, Baltimore’s newest craft beer producer, is excited to announce their initial release of their flagship beer, “Baltimore Pale Ale”. Their introduction to the ever growing craft beer market will take place on Saturday, December 29th at The Americana in Canton, 900 S. Kenwood Ave, Baltimore, MD 21224. The first pint of “Baltimore Pale Ale” will be poured at 8:00 pm sharp. Baltimore Pale Ale pints will be sold for $2 all night.

Full Tilt Brewing, (FTB) is also launching their Community Support program the night of the release, whereby their portion of the $5 cover charge and subsequent raffle tickets, will go directly to The American Legion’s — “Heroes to Hometowns” non-profit organization. While this is only one event supporting those who have given the most for our country, Full Tilt Brewing will focus on continuing to support local veteran causes in the future. This is the least we all can do for these brave and selfless individuals.

Included in the cover charge each patron will receive a wristband for entry and their first raffle ticket along with a separate ticket for (1) pint of BPA redeemable any time after 8:00 pm. Each additional raffle ticket can be purchased for $5 for the chance to win a Full Tilt Brewing prize package including a BPA tap-handle. The winner will be chosen via drawing at 10:00 pm. Winner must be present to win.

Full Tilt Brewing exemplifies its hometown Baltimore pride with its deeply rooted design of the tap-handle. With sections including the Maryland flag, cobblestone mimicking that of the streets of Baltimore, and a section of Baltimore’s skyline topped off with crab claws holding the decal spot where each separate beer will be identified. It is inevitable that with their initial release of “Baltimore Pale Ale”, they will be known as one of the most Baltimore Centric beers in the area.

Though only launching with “Baltimore Pale Ale”, their flagship beer, they already have plans for several more to be released in the coming months. Initially consisting of all 13.2 gallon kegs, they will soon begin offering 1/6 kegs and bottles which will help expand the reach of their product through liquor stores as well as bars.