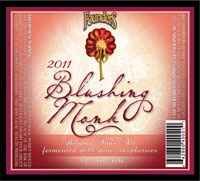 Engbers said part of the almost $7 million expansion to the brewery, which increased capacity from 28,000 barrels to nearly 50,000 barrels, includes a state of the art bottling line that allows them the flexibility to bottle and package 12oz as well as large format 750ml bottles.

The first “Backstage Series” release is sure to put a smile on the face of Founders fans. “We haven’t produced this product in over four years and people have been begging for it—so this is the perfect time to bring Blushing Monk back to market.” Blushing Monk is a decadent Belgian Raspberry Ale that was last produced in 2007, and is still highly sought after.

The company is not revealing the entire lineup, but Engbers said it would consist of many of the “popular one-offs” that have been offered in the taproom over the years and have become favorites. “I think part of what people love about Founders, besides our beer, is that we listen to what they are saying,” says President Mike Stevens. “With our new line, now we can offer them more of what they’ve been asking for.”

The company expects to release two or three in the series this year.