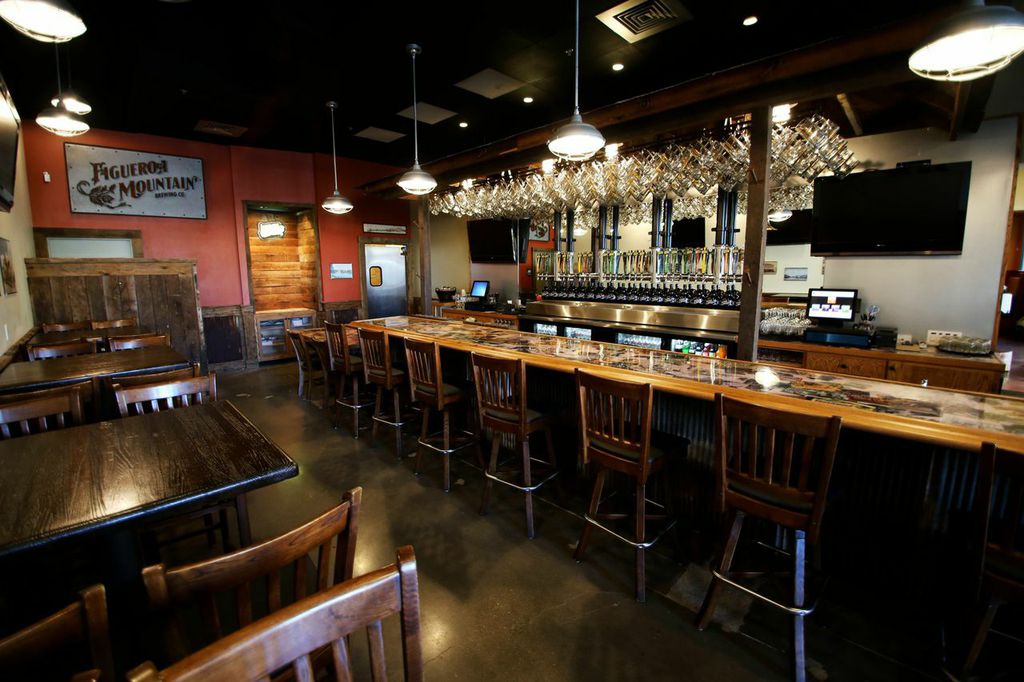 Buellton, Calif. — Only four years ago Figueroa Mountain Brewing Company opened up their brewery and first taproom in Buellton, California. Since then, the company has experienced fast growth with two more taprooms opening in Santa Barbara and Los Olivos.

Adding to the roster will be a fourth taproom opening in Santa Maria, California this month with a Grand Opening on Saturday, November 22, 2014. Located in College Square at 560-B Betteravia next to Me-n-Ed’s Pizza, the new taproom will be open Monday-Saturday from 11:00 AM to 11:00 PM and 10:00 AM to 11:00 PM on Sundays.


“We are excited to open a taproom in an area so rich in history and tradition,” says President Jaime Dietenhofer about expanding into Santa Maria. “Every year we attend the Santa Maria rodeo and we’re big fans of Santa Maria BBQ. Craft beer is the perfect pairing with Tri-Tip and we will even be marinating Tri-Tip in Davy Brown Ale for sandwiches on our ‘Bar Bites’ menu.”

The taproom menu that Dietenhofer is referring to offers dishes such as a burger, Tri-Tip sandwich, pizza, Caesar salad, spicy chicken lettuce wrap and more. On Sundays the taproom will be open early for “Beerunch” starting at 10:00 AM with breakfast burritos along with FigMtnBrew’s beer cocktail list featuring standards like their “Beer Mary” (a Bloody Mary made with beer) and “Hopped-Mosa” (Mimosa made with beer). For a sweet finish to your meal, Beer Floats are also on the menu as well as Root Beer floats for those who prefer a more traditional combination.

Santa Marians will now have more nightlife options with Figueroa Mountain Brewing Company’s daily entertainment such as live music every Friday and Saturday nights and Wednesday Game Night with a variety of board games to play with friends. Additional promotions include Benefit Taphandle Night also on Wednesdays where proceeds from a designated beer will benefit a local nonprofit/charity and Industry Night on Tuesdays for staff working in the hospitality industry. Every Tuesday is “Taco Tuesday” with $2.00 off the Tri-Tip Tacos. Thursday night is College Night for local students, 21 years and older, who can purchase $4 pints with a valid student id.

Military servicemen and women can show their military ID any day for 10% off their order including beer and merchandise to-go. On Mondays they can order beer all day for only $4.00 per pint.

Local fans of Figueroa Mountain Brewing Company can now sign up for the Davy Brown Mug Club for the Santa Maria taproom. Membership costs $150.00 per year and includes a dedicated mug for the same price as a pint—that’s 9 ounces of free beer with every beer. Other benefits include quarterly appreciation parties and field trips, monthly excursion opportunities, first offering for tickets, new releases and more. A full list of benefits can be found on www.FigMtnBrew.com/MugClub. To join the Mug Club, email mugclub@figmtnbrew.com or stop by the taproom to purchase your membership.

For more information about the Figueroa Mountain Brewing Company taproom visit www.FigMtnBrew.com or follow them on Facebook: www.Facebook.com/FigMtnBrewSM for the latest news and events.

Figueroa Mountain Brewing Co. was founded by father and son team, Jim and Jaime Dietenhofer, in 2010. With a passion for craft beer, they set out to pay homage to the beautiful Santa Ynez Valley with handcrafted beer and hand-drawn artwork depicting the local landscape on their labels. There are currently four taprooms in Santa Barbara County and more set to open soon in surrounding areas. Figueroa Mountain Brewing Co. beer can be found in their taprooms or at select retailers and restaurants throughout California. Learn more about #FigMtnBrew or where to find their beer at www.figmtnbrew.com.