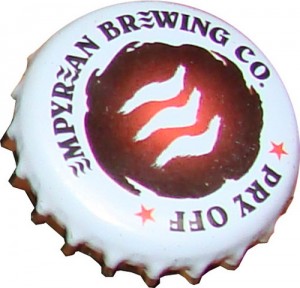 Appropriately named Carpe Brewem (which means, ‘seize the beer’) this line is carefully hand-crafted in small batches with limited availability and distribution. “Buy it when you see it, because this beer will go fast,” explains Engelbart.

A non-barrel aged version of this beer is more widely available on draft.

According to folklore, since the dawn of time all people marveled at the mysteries of the universe, and brewed beer. These ancients sipped on their hand-crafted brews and dreamed of a paradise existing at the highest point in the universe; inside a fiery sphere they called Empyrean. It’s this legend that gave the brewery its name and tagline, “the taste of dreams come true.”

Packaging more than 5,500 barrels of beer each year, Empyrean Brewing Co. offers eight to ten varieties at any one time. Six of these are bottled on site and distributed year round, while seasonal and limited release selections are available on draught and in bottles. Full descriptions of their various beer styles are available at www.EmpyreanBrewingCo.com.