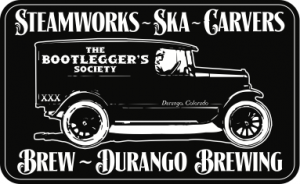 DURANGO, Colo. — Continuing with its mission to support the community that has supported the local craft brewers, the Durango Bootleggers Society will host the society’s Spring Tonic Release and Repeal of Prohibition Party to benefit the La Plata County Historical Society, Monday, April 7, 2014.

Festivities begin at 6 p.m. at El Moro Spirits and Tavern, 945 Main Ave., Durango, and the public is invited.

“El Moro, with its authentic Durango history and décor, is the perfect location to celebrate the repeal of Prohibition,” said Brian McEachron, co-founder, Steamworks Brewing Co. “Plus the folks at the Historical Society and the Animas Museum helped us ‘find’ so much of El Moro’s history, we want to return the favor with a fundraiser.”

Dr. Duane Smith, well-known historian, author and Fort Lewis College professor, will be on hand to speak about Prohibition and its repeal — and how it played out in Durango. Party guests are encouraged to wear “speakeasy” fashions typical of the day, and prizes will be awarded for “Best Dressed.”

The Bootleggers Society’s annual specialty brew, the Spring Tonic elixir, co-brewed by the brewers (physically this year at Carver’s), will be tapped at 6 p.m., and served in a commemorative “jar.” The Spring Tonic is an American pre-prohibition lager brewed from a recipe thought to be from the late 1800s.

“And if you buy a Tonic, you get to keep the jar,” added McEachron.

Durango’s four award-winning craft breweries, Carver, Durango, Ska and, Steamworks brewing companies, originally came together in 2003 as the Bootleggers Society with a mission to raise the awareness and understanding of craft beer by rallying around the needs of the community. Brew, the most recent addition to Durango’s craft brew line up, joined the consortium in 2013.

The Bootleggers have led the way nationally in the craft brewing industry for collaborative fundraising by establishing the Durango Bootleggers Society Fund under the auspices of the Community Foundation of Southwest Colorado. The fund enables tax-deductible donations.

El Moro Spirits and Tavern, located at 945 Main Ave., Durango, Colo., is open daily for lunch and dinner, as well as brunch on Saturday and Sunday. Additional information is available at www.elmorotavern.com or 970.259.5555.