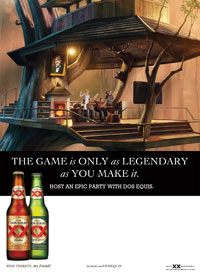 NEW YORK, NY — Dos Equis, one of the fastest growing upscale import brands in the U.S., is taking the sports-viewing experience to a more interesting level at retail and on-premise with the debut of the Dos Equis Game Changer activation. Running January through March, Game Changer inspires adults to take their in-home sports viewing experiences to new heights while enjoying Dos Equis Lager and Dos Equis Ambar.

In the on-premise, Dos Equis invites patrons to get into the competitive spirit by submitting their own version of the television legend lines for a bracket tournament. The best legend lines are selected by the bar staff and showcased on the official Most Interesting Bracket Poster for all to see. At the end of the tournament, patrons can return to the account to vote for their favorite lines. The Most Interesting Legend Line winners earn bragging rights and localized Dos Equis rewards (where legal).

“Dos Equis consumers are big sports fans who embrace the passion and emotion of the January through March football and basketball tournament season,” said Gwendolyn Boyce, Brand Director Dos Equis at HEINEKEN USA. “The Most Interesting Legend Line Tournament leverages our successful Most Interesting Man campaign by engaging consumers in a competitive way on-premise, while also generating return traffic for the account.”