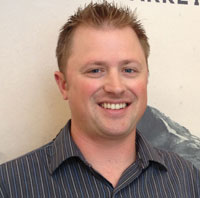 BEND, OR – Deschutes Brewery has promoted Adam Birdwell to the newly formed position of account sales specialist in the San Francisco Bay Area. An employee at the brewery’s flagship pub in downtown Bend, Oregon for the last year, Birdwell will relocate to the Bay Area to help establish and manage relationships with distributors and retail accounts in the area.

“Adam has proven to be a valuable team member over the last several months, and has gained high-level knowledge of our beers and business,” said Eric Kremer, sales zone manager for the brewery. “He will use that knowledge in his new position to help us create and maintain important relationships in the San Francisco area, one of our key markets.”

Birdwell, whose brother Scott Birdwell is a brewer for the company, has spent the last five years in customer service as a waiter in Tahoe-Donner and in Bend. He holds a bachelor of arts in philosophy from California State University, and also holds a certificate from the university to teach logic and critical thinking.