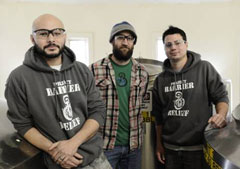 Using Barrier’s recipe, Ommegang is brewing about 400 kegs of the collaboration ale. Barrier Relief Ale will be sold under the Ommegang label and distributed in Barrier’s market in NYC and the surrounding area. Profits will benefit Barrier as they restore their brewery.

“We’re rebuilding. We’ve reordered all of the equipment that we need to be operational again,” explained Barrier’s founder, Evan Klein. “The goal is to be up and running before the year is out.” The company was able to salvage some of its finished beer and currently has limited distribution near Oceanside, NY.

Sandy caused nearly $100,000 worth of damage to Barrier Brewing, which has been operating at their new location on Long Island’s South Shore for just four months.

After the storm, Simon Thorpe, President and CEO of Brewery Ommegang and Duvel Moortgat USA, released this statement to the craft brewing industry, “Brewery Ommegang in Cooperstown, NY, is fortunate to have been undamaged by Hurricane Sandy. After seeing the devastation wreaked across the mid-Atlantic and Northeast, we’d like to offer our assistance and support to other breweries that may have suffered from the storm.”

Klein contacted Ommegang and the breweries decided to collaborate on a beer.

Barrier’s Craig Frymark said the opportunity to work with Ommegang is a positive outcome of the storm. “Ommegang is a brewery we’ve always been inspired by and have admired and to actually be here on the ground making a beer with them is a really exciting thing.”

Ommegang began brewing Barrier Relief Ale on November 28 during a visit from the Barrier team. Made with an astonishing 200 pounds of hops, the ale is being called “the hoppiest beer” ever brewed at Ommegang but the collaboration is in keeping with the innovative character of the craft brewing community.

“It was natural to offer a helping hand and foster the communal spirit of the industry,” Thorpe said. “The opportunity to brew a beer so outside our traditional style just made it intriguing to us.”

Barrier Brewing Company will be at Ommegang on Thursday, December 13, to taste the ale before distribution begins at the beginning of January.

Brewery Ommegang opened in 1997 to craft-brew fine Belgian-style ales. The brewery creates six ales year-round, as well as an extensive and imaginative range of seasonal and specialty ales. The beers have won a national following by connoisseurs of fine beer and are distributed in 45 states and internationally. Ommegang is located on a 136-acre farmstead in Cooperstown, New York, USA and offers free daily tours and inexpensive tastings as well as a 100-seat café, a well-stocked brewery store, and an annual calendar of public events. Ommegang is open every day of the year except for Christmas Eve Day, Christmas Day, Thanksgiving Day, and New Year’s Day. For more information, please contact info@ommegang.com, call 1-800-544-1809, or visit www.ommegang.com. Ommegang is a member of the Duvel family of fine beers. Follow Ommegang on Twitter and Instagram. Like us on Facebook.